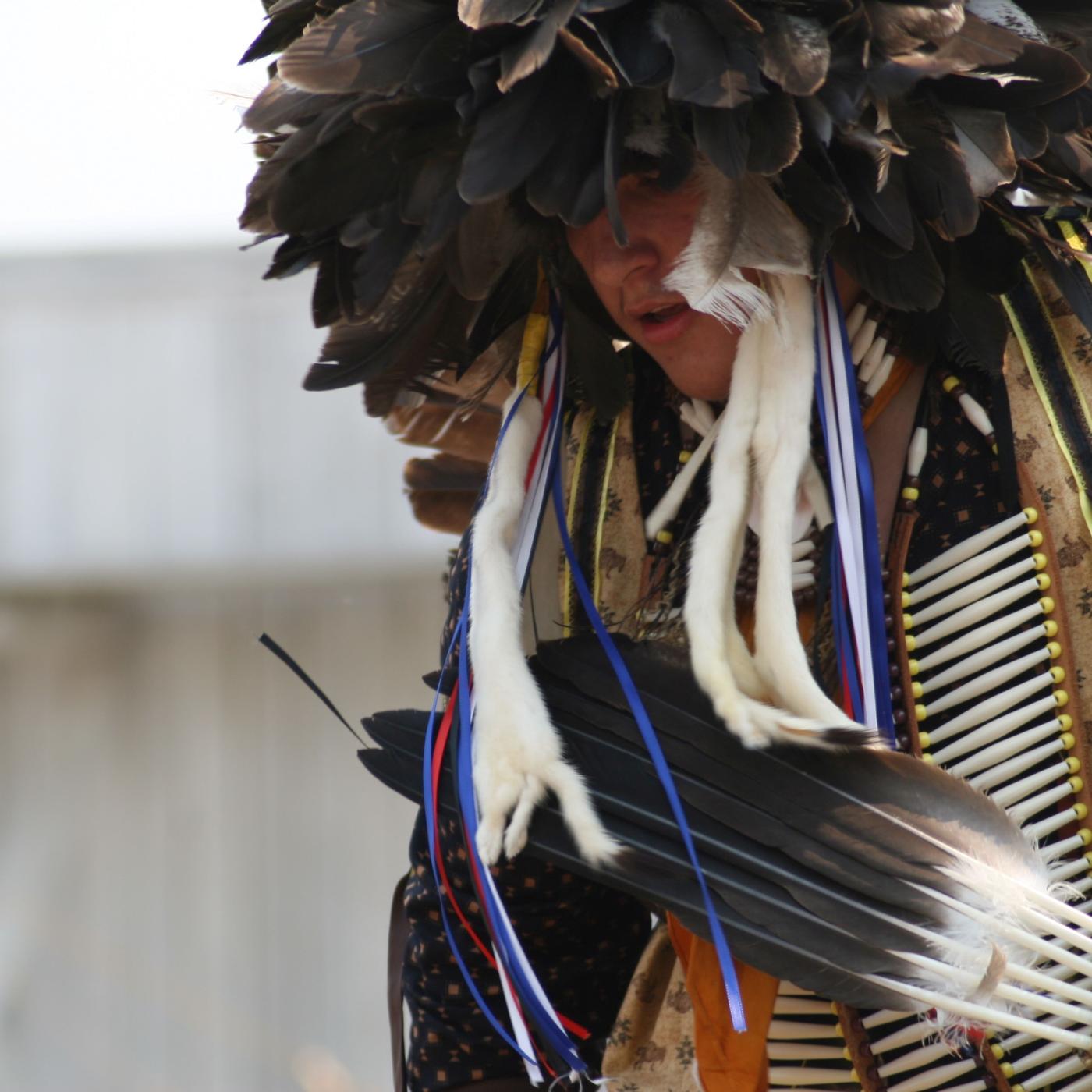 Podcasts celebrating the the past, present, and future of Indian Arts Showcase.

Hello everyone. I’m Leif Halvorson, summer seasonal ranger at Fort Union Trading Post National Historic Site. The following podcast is an interview that was conducted online, which will explain some of the electronic and digitized chirps and clicks that you’ll hear from time to time, with one of our participants from our annual Indian Arts Showcase. Leif: Why don't you go ahead and introduce yourself? Give us your name your tribal affiliation where you're from and what keeps you active in understanding your culture? Marc: Okay, my name is Marc Bluestone, Senior. My Indian names are [gu cow ish] which interpreted the interpretation is “hear him coming” and my other Indian name is [pey toe how], which is “firekeeper.” I'm an enrolled member of the Mandan Hidatsa and Arikara Nations. I'm also a through my mother, also part Seneca and Cayuga. So I'm what's known as a Heinz 57 Indian, meaning, I have a lot of different Indian bloodlines. But I am an enrolled member of the Three Affiliated Tribes, the M.H.A. nation. I'm also a member of our the Hidatsa Clan the [ma ho ka be] or Alkali Lodge. And really what keeps me connected as is this thought process of who I am and who I want to be at all times and trying to understand more about our culture and our way of life to ensure that trying to do things so that it will exist, you know a hundred years from now Leif: right

Marc: You know, or whatever sport, you know wrestling. I coach wrestling for 18 years and I've yet to see what, working hard academically and doing well in school and pushing yourself to do well. And it does wonders. Leif: It does.

Marc: And that's a one day thing. That's how you create tomorrow's leaders is, yeah sports is important, activities are important, but you also got to push your kids in the right way to ensure that the you know, you have to learn to read and write and be productive in class and be able to speak and be able to write and you know so that you can be successful and I think about my last after many many many many years having kids in school, that we have six kids, and the runt of our litter just graduated 4 years ago is the valedictorian of our school district. You know, and they were a straight-A student High School, and was involved in a lot of activities and I was amazed that, you know went to NDSU this past year and he does an elementary degree in a family's consumer family's health services. Whatever that other degree is, I’m not sure. Anyways, in four years he graduated from college and he was on the honor roll every semester. He had to B's the whole time that he was at NDSU in Fargo for his two degrees. And what it what I'm getting at is you can go to a reservation school like Newtown and that we get a bad rap at times that you know, we don't prepare them academically, but how can a kid who graduated from here? He didn't miss a Beat. You know, he went on to NDSU got his four-year degree. Well my three of my other kids have like I was like six or seven degrees between five of them you know, of the six, he didn't miss a beat. So you can get educated Newtown and you get a great great education and you can move on and get a great education be successful in another college. Now the next part of course being a earner to be productive to society, you know, and that's our next Leif: Yeah. Marc: really our next thing because, gotta be taxpayers, man. I gotta hope that they’re gonna pay taxes so that if I get into the right kind of nursing home later you know. Leif: [laughs] Marc: [laughs] Leif: I talk with my students about how you know, the decisions that that we make today affects the decisions that we make tomorrow. And I've said we kind of treat this whole 18 year old thing is like this magical age. And I wish that I could tell you that when you're 18, you can make these good decisions. You can take care of yourself. You can be responsible. But the truth of the matter is there's nothing magical about that age and to be able to do that is you need to decide today that type of young man or woman you're going be when you are on your own. But unless you make those decisions now a series of small ones that affect them that are pointing you towards that, that's just not going to be the case for you. And not that you can't still achieve good things, even after that, it just might be a rougher patch for a while. As you are having to really double down to figure those things out. So it's really to your benefit today make those wise decisions today because if you do today, it's going to be easier tomorrow. It's going to be easier than day after that. But if you put it off today, if you put it off tomorrow, you're probably going to put it off again later. So make those decisions now to do those things so that when the time comes you're ready. Otherwise, you're just not going to be as well prepared for that. Marc: Absolutely. And I think that's we all have a responsibility and ensuring that our kids do well as part of that and it starts when they're little. Start promoting when it starts when they’re two three years old when you're talking to them and reading to them and promoting books and things like. You know, so I just think that that you know, educators, you know that have children should know the should have a really good standpoint that their kids should do well. Leif: Right. Marc: So how can you not promote education at home when you were an educator, you know? Leif: Yeah.

Listen in as Marc Bluestone, Sr. explains how important it is for native peoples to understand their culture. In doing so, everyone around them are more to understand as well.

Hello everyone. I’m Leif Halvorson, summer seasonal ranger at Fort Union Trading Post National Historic Site. The following podcast is an interview that was conducted online, which will explain some of the electronic and digitized chirps and clicks that you’ll hear from time to time, with one of our participants from our annual Indian Arts Showcase.

Leif: Typically this weekend is when we would be hosting our annual Indian art showcase here at Fort Union, but just due to the way that things are right now that's not possible. But we're very honored to be able to talk to some folks that have been involved with Indian art showcase and give some different perspectives on that. How about you introduce yourself? Go ahead and give us your name what your tribal affiliation is where you're from and what brings your interest into understanding your culture. Thearsha: Hello. My name is Thearsha McGillis. I am enrolled in the Turtle Mountain band of Chippewa. I'm living in Trenton North Dakota and my knowing about the culture and what interested me was how the younger generation has stopped learning about our culture and I wanted to keep that going. So doing that, I started dancing when I was in about 2012. That's when I got my Indian name, which is Crow Hawk Woman, and that way I can introduce myself and talk to kids who are younger than me, and when we’re gathering around just kind of hang out with friends and family because most people know I danced living around here. So that's always nice and a lot of people have questions about it, what’s going on. Leif: Now when it comes to the dancing, and what's kind of neat for me, is about the time that I started being here at Fort Union more, you were at one of the first Indian Arts Showcases that I got to be here for, so I've gotten to see you perform before and kind of watch you grow up a little bit, you know one one event per season type of a thing which is which is kind of cool. So could you describe like for Indian Arts Showcase anyway, for folks who've never been there before, there's actually a variety of dance styles that are being done or dance genres based upon the type that it is and even what you're wearing. Could you elaborate on that a little bit for us? Thearsha: Yeah, so men and women all have different categories. There's for men's there’s traditional, grass, fancy, and [electronic blip] and those all kind of vary on what you were learned and taught as you grow up. And for women's you have traditional, fancy, and jingle. And I dance jingle and that dance is like a healing dance. It's like a healing dance. So when I'm dancing I am sending prayers to a everybody who needs prayers or just to send them out and that way people like understand this is what my dance is. So we do that. And then when I dance at the Indian arts it, you know makes me grateful that you know, I was asked to do that and show my culture with people who has never been able to see that before. And then when people, you know people come up and talk to me after we’re done and it's like they say “ Is this just for fun or is it like a lifestyle?” I say it's a lifestyle. I travel all over the summer. I wouldn't trade it for the world. Leif: You talked about how the dancing that you do is a type of prayer dance. Thearsha: Yes. Leif: What other things are taking place with the different styles of dances? Thearsha: Um the fancy shawl, which is also a woman’s dance, is considered a butterfly, because as you're dancing they you started in a cocoon and you slowly open up that means you're opening up to the world and you're saying this is me. That's always nice. I used to dance it also, but I went to the old style jingle, which was, you know, they started contemporary now, which is fancy footwork. And that's not me. I like the old style. I like to be how they were. Leif: Right. Thearsha: This one, you don't crack it or no circles, or you don't go backwards. And that's always nice because it's easy. I can't say it easy. It's hard actually. And then um, it's new, or more people are starting to dance the old style way, going back to how they used to dance when they first started this. Leif: So there's a little bit of a resurgence to more of the traditional style within the dance. Thearsha: Yes.

Listen in as Thearsha McGillis gives us her perspective of Indian Arts Showcase and what her hopes are for future generation's powows and ceremonies.