Boston and the Underground Railroad

For nearly four years, Sarah and John Sella Martin lived at 26 Myrtle Street.1 Born enslaved in North Carolina, John Sella Martin escaped in 1856 and made his way to Chicago. By 1859 he relocated to Boston and became the preacher at the African Meeting House.2 Though only in Boston for about four years, Martin helped bolster membership at the church and the congregation flourished under his leadership. Active in the anti-slavery movement, he used his personal experience with the horrors of slavery to preach an abolitionist message. According to one historian, “Boston’s black churches were filled with abolitionist sentiment. Sermons often carried an antislavery message. When fugitive slaves such as J. Sella Martin and Elijah Grissom entered the pulpit they took their experiences as bondsmen with them.”3

In addition to the work of her husband, Sarah Martin founded the “Fugitive Aid Society,” an organization of African American women in Boston. The organization collected donations of food, money, or clothing for the freedom seekers that arrived in Washington D.C. as refugees during the American Civil War. According to an advertisement in The Liberator, “Any Donations of money, or clothing of any kind, may be sent to Mrs. J. Sella Martin, the President, at 26 Myrtle Street.”4 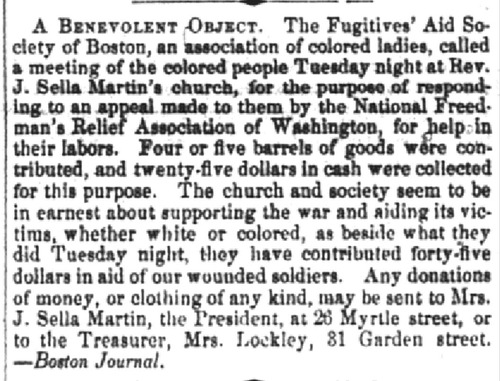 Newspaper clipping about the Fugitives' Aid Society in Boston, which the Martins participated in. (Credit: The Liberator, October 10, 1862)