Quick Facts
Location:
Latitude: 42.450714 Longitude: -71.270426
Significance:
Parker's Revenge is the name given to the second engagement between the British regulars and the Lexington militia company under Captain John Parker. Despite the significance of the battle the location was a mystery. Between 2012 and 2016 Minute Man NHP, in partnership with the Friends of Minute Man National Park, NPS Northeast Region Archaeology Division, and community partners and volunteers, conducted a historical and archaeological investigation to find it.
Amenities
4 listed

On the morning of April 19, 1775, Lexington’s militia company under the command of Captain John Parker was confronted with a terrible dilemma. Several hundred British soldiers had been spotted on the road barely half a mile away. Should the militiamen stay in their homes and hope the soldiers pass by peacefully, or do they unite and confront them? They chose to stand their ground. According to Captain John Parker “We gathered on the green in said Lexington to consult what to do, and concluded not to be discovered nor meddle nor make with the soldiers unless they should insult us. Upon their sudden approach I immediately ordered my company to disperse and not to fire.”

The first shots of the American Revolution occurred at roughly 5:30 in the morning, April 19, 1775. In the space of no more than a few minutes, life for the people of Lexington had changed forever. Eight of their neighbors and relatives were dead and ten were wounded. What they did next is a testimony to their courage and the leadership of Captain Parker.

Nathan Munroe, veteran of the April 19 battle, remembered fifty years later, “About the middle of the forenoon Captain Parker having collected part of his company, I being with them, determined to meet the regulars on their retreat from Concord. We met the regulars in the bounds of Lincoln. We fired on them and continued so to do until they met their reinforcement in Lexington.”


Where did this second encounter occur? Following a multi-year historical and archaeological investigation funded by the Friends of Minute Man National Park, under the direction of project archaeologist Margaret (Meg) Wilkes (Watters), and with the help of several dedicated volunteers, we can now say with near certainty that we have an answer.

Just yards from the border of Lincoln and Lexington there is a prominent rocky outcrop that for decades had been identified as the site of the battle. However there was virtually no physical or historical evidence to support this claim. The investigative team began looking in the woods just north of the outcrop in the hopes of finding evidence of the British “flankers”. The flankers would have operated in the fields and woods along the road to protect the marching column and keep it moving. To everyone’s surprise, not only did they find evidence of the flankers, they also found evidence of the militia in the woods as well.

The land in that area rises gently from the road up to a wooded, boulder-strewn ridge. There is room in that position for at least 70-100 troops to find cover. From there they can direct their fire upon the road, and upon a small bridge that crossed a stream. Unlike the rocky outcrop, the position in the woods also allows for an easy withdrawal and cannot be outflanked.

From the data collected during the investigation it appears that militiamen on the ridge fired toward British soldiers as they deployed into the woods to the left of the road as they crossed the bridge. The British soldiers, once deployed, returned the fire and the militia withdrew northeast towards Lexington. The soldiers then likely moved up and held the high ground as the rest of the column moved through.

And so with this discovery, a centuries-long mystery was solved. Historians also learned a great deal about the conduct of the fighting on the Battle Road. While this was a running fight with little by way of proper 18th century tactics, here at least there is tactical thinking evident. Having left Lexington center before noon, Captain Parker and his militiamen had time to think about how to use the landscape to their advantage. Perhaps still questioning the decision to make a stand on the town green, Captain Parker was not going to be careless with the lives of his neighbors, relatives and friends. If the stand on the Green was meant as a show of resolve more than an invitation to battle, the fight on the town border in the afternoon was the real thing. 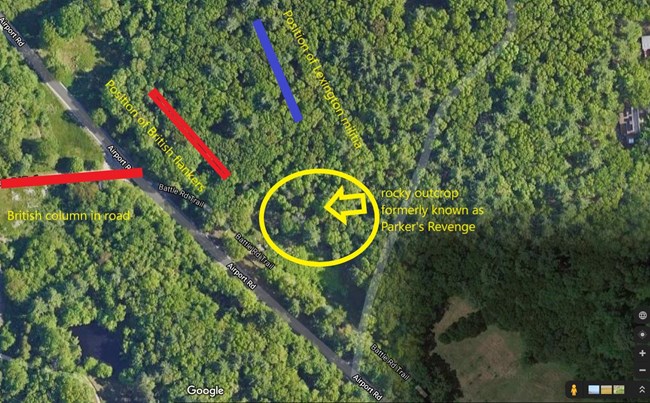