Born in the Shetland Islands on Christmas Day, 1812, Forbes Barclay was afflicted with a cleft palate. His father was a prominent physician who lectured on anatomy at Edinburgh and had authored a book on the movements of muscles.

Young Barclay studied medicine in Edinburgh and, beginning in 1834, spent several summers as a surgeon with exploring expeditions to the Arctic.

One of these voyages ended in shipwreck, but Barclay was one of the survivors who were rescued by Eskimos and eventually returned to Britain in Sir John Franklin's ship. He was granted his medical diploma by the Royal College of Surgeons, London, on July 5, 1838.

The Barclay family had connections with the Hudson's Bay Company. Archibald Barclay, said to have been an uncle of Dr. Forbes Barclay, was appointed the firm's secretary in London in 1843; but either he or another uncle, the Reverend Thomas Barclay, had been known by Governor George Simpson for at least several years prior to that time.

Perhaps this association was related to the fact that on June 4, 1839, Forbes Barclay entered the service of the Hudson's Bay Company in the dual capacity of clerk and surgeon and was placed on the list of those awaiting assignment. That fall he sailed in the Columbia for Fort Vancouver, where he arrived in the spring of 1840.

Relieving Dr. W. F. Tolmie, Barclay at once went to work in the Indian Trade Shop and in the medical department. He served with distinction both as fur trader and physician until he retired from the Company's employ during 1850. He then moved to Oregon City, became an American citizen, and was prominent in professional and political affairs until his death in 1873.

In 1842 Dr. Barclay married Maria Pambrun, eldest daughter of Chief Trader Pierre Chrysologue Pambrun and Catherine Humpherville, herself the daughter of an Englishman in the service of the Company. Born at Fraser Lake, New Caledonia, on October 5, 1826, Marie, as she was known to her largely French-speaking family, was a girl of character and beauty. 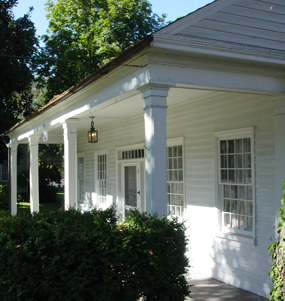 The Barclay House, built in 1849, remained in the Barclay family until the 1930s.

Early in 1841, while living with her parents at Fort Walla Walla, she became engaged to Cornelius Rogers, an associate of the American Board's Oregon Mission. This event stirred up a storm among the Whitmans and Spaldings chiefly, it seems, because Marie was a Catholic, though the facts that she had Indian blood, could speak little English, and could boast of only a scant formal education evidently were also taken into consideration.

Chief Trader Pambrun died as the result of a fall from a horse during May of that year, and soon thereafter Catherine Pambrun moved with her children to Fort Vancouver, where she did 'fine needlework' to support and educate her brood. Although described as 'distressed,' the family was not in desperate circumstances, because Pambrun left an estate then estimated at not 'much short of 4000£'

The elder Pambrun had much favored his daughter's planned marriage to Rogers, but shortly after his death Maria terminated the engagement. Her acquaintanceship with Dr. Barclay evidently began with the family's arrival at the depot and resulted in union during the next year.

It is known that prior to October 1850 Catherine Pambrun and her children moved from Fort Vancouver to live with her daughter and her son-in-law, Dr. Forbes, in Oregon City. Whether the Pambrun family had also dwelt with the Barclays at Fort Vancouver between 1842 and 1850 has not yet been discovered."