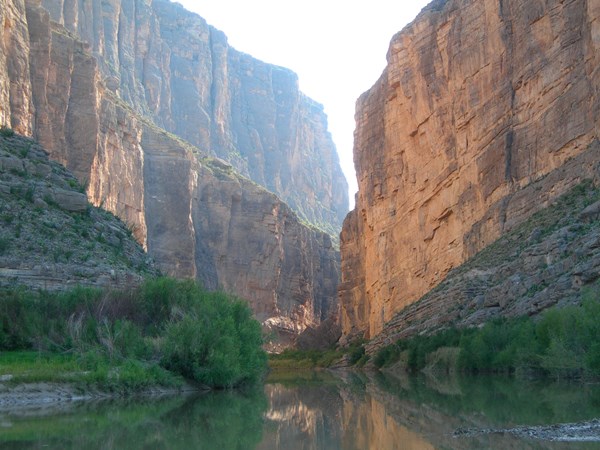 Clean air and clear views are critical for appreciating national parks across the country. Unfortunately, haze can negatively affect how well people can see by dulling the colors and details of a view and even hiding distant features. In the 1980s, 1990s, and 2000s the NPS led several visibility studies aimed at identifying the sources of haze causing pollution at specific parks and improving visibility monitoring methods.

The primary objectives of BRAVO were to:

The BRAVO study involved a four month intensive monitoring period from July through October 1999, followed by a four-year data analysis and modeling effort examining the BRAVO data and past data collected at Big Bend NP. This work was conducted by the National Park Service and the U.S. Environmental Protection Agency (EPA) in cooperation with the Texas Commission on Environmental Quality (TCEQ) and the Electric Power Research Institute (EPRI).

Project MOHAVE was an extensive monitoring, modeling, and data assessment project designed to estimate the contributions of the Mohave Power Plant to haze at the Grand Canyon National Park and other nearby Class I areas. The field study component of the project was conducted in 1992. The process of identifying and quantifying the impact of MPP’s emissions on Grand Canyon visibility was accomplished using both receptor oriented and source oriented models. These two assessment methodologies made extensive use of the measured air quality and meteorological data. Study results showed that the Mohave Generating Station is not the major cause of visibility impairment in the Canyon. Air pollution from other areas, including Southern California, is also transported to the Grand Canyon and has an impact on visibility in the Park. However, evidence suggests that the Mohave Power Plant contributes to visibility impairment at the Grand Canyon and is likely the single largest contributor to haze in the park.

An intensive field monitoring program was undertaken during the summer of 1990 to study the contribution of emission sources to ambient particulate concentrations and regional haze in Washington state, west of the Cascades. The study area included: Mount Rainier, North Cascades, and Olympic National Parks. This study aimed to determine the spatial and temporal patterns of visibility reducing air pollution. And, despite complex atmospheric transport, dispersion, and chemistry factors, strong source-receptor trends emerged. The Centralia power plant, urban sources, pulp and paper mill activities, and fires all contribute to air pollution haze in the parks to differing degrees.

WHITEX was established to study the visibility impacts of emissions from the Navajo Generating Station (NGS) on Grand Canyon NP with an experiment during January and February of 1987 . During this time, an artificial tracer, deuterated methane (CD4), was released from the Navajo Generating Station at Page, AZ near the eastern end of the Grand Canyon. Aerosol, optical, tracer, and other properties were measured at Hopi Point (on the south rim of the Grand Canyon) and other locations. Using the tracer, 70% to 80% of the sulfate at Hopi Point under certain meteorological conditions in the winter was attributed to the NGS (Malm et al., 1989b). Some controversy arose from this attribution since the ratio of the CD4 emissions rate to power plant load was not maintained at a stable value (Markowski, 1992). This study demonstrated the potential of tracer techniques for single source attribution. The study also showed that maintaining a stable tracer/power load emission ratio and using a low cost tracer analytical technique could improve the quality of the source attribution.

During the late summer and fall Yosemite National Park experiences some of the highest organic mass concentrations of any national park in the United States. Organic carbon particles are the single largest contributor to visibility impairment. Over a period of several weeks in late summer and fall of 2002 a special study was conducted to investigate the origins and physical/optical characteristics of this aerosol carbon.