Part I: Short of War

In 1932, the Department of the Navy designated the Boston (Charlestown) Navy Yard to be the building site for destroyers. Two years later, the USS McDonough (DD-351) slid down the ways, marking the first major ship launching at the yard in over a decade. The launch of McDonough ushered in the most productive period of ship construction in the history of the Navy Yard. By September 1, 1939, when Nazi Germany invaded Poland, the Boston Navy Yard had completed and commissioned six new destroyers. Furthermore, several other destroyers and auxiliary vessels were in various stages of construction across the facility. Though Germany's invasion of Poland sparked war in Europe, the United States remained neutral.

Shortly after the beginning of hostilities in Europe, the U.S. Navy organized a neutrality patrol utilizing several of the new vessels built in Boston. This patrol monitored the activities of warships of belligerent nations within 300 miles of the coasts of North and South America as well as in the Caribbean Sea. Beginning in 1940, the Navy and Coast Guard began providing escorts for merchant convoys bringing provisions, fuel, and military supplies to Great Britain in this neutral zone. The work of these escorts in the oftentimes rough waters of the North Atlantic was punishing, and the Boston Navy Yard had to focus on the constant maintenance and repair of these ships.

After the fall of France in the summer of 1940, attacks on convoys bound for Great Britain increased dramatically. With the establishment of bases for the German Kriegsmarine (Navy) and Luftwaffe (Air Force) in France, losses in merchant shipping and British escorts nearly surpassed the production capacity of North American and British shipyards. To keep the British in the fight, President Franklin Delano Roosevelt pledged that America would provide all assistance “short of war.”

Under the “Destroyers for Bases Agreement,” arranged between the governments of the United States and Great Britain in 1940, fifty WWI era destroyers were transferred to the Royal Navy for desperately needed escorts in return for 99-year leases that allowed for the establishment of American military bases in British Territories from Canada to the Caribbean. In September 1940 the Boston Navy Yard was tasked with overhauling and outfitting the first eighteen destroyers that the US Navy was transferring to the Royal Navy. Working as quickly as possible, the shipyard’s labor force had these ships ready for transfer within a matter of days.

By the summer of 1941, the Boston Navy Yard was a hive of activity; the yard’s labor force had increased from 3,875 in January 1939 to 18,272 in order to meet the increased demand for new ship construction. By then, it had become standard practice to lay the keels of two to four vessels and proceed with their construction at an even pace, with launchings occurring as soon as the hulls were completed. In September, the keels of the first Fletcher Class destroyers to be built at Boston Navy Yard were laid down. The Fletcher Class was considerably larger and more complex in construction than the destroyers previously built at the yard.

In regards to the physical plant of 1941, storage facilities and several new administrative and shop buildings, including a five-story electrical shop, were under construction in Charlestown while ship repair and conversion facilities were expanded at the South Boston Naval Annex (acquired shortly after World War I). Along the waterfront, piers were added, rebuilt, or extended, and the capacity for shipbuilding was dramatically increased with the construction of Shipways 2 and 3 (the latter now referred to as Dry Dock 5). Additional ship repair facilities were acquired by the Navy in Chelsea and East Boston. A Fuel Depot Annex was constructed alongside Chelsea Creek in East Boston and connected by pipeline to a fuel pier extending out into Boston Harbor.

In August 1941, escort duty was extended to Iceland where the likelihood that American warships would be involved in combat had dramatically increased. On September 4, 1941, the USS Greer became the first American vessel to use its weapons, dropping a pattern of depth charges after a German U-boat fired two torpedoes at the destroyer. A little more than a month later, on October 17, the destroyer USS Kearny was badly damaged by a torpedo that killed eleven of her crew. Damage control parties saved the vessel and she was subsequently brought into Boston Navy Yard for extensive repairs. The USS Reuben James was not so fortunate, torpedoed and sunk with heavy loss of life on October 31, 1941. At that point, it was clear to the American public that the nation’s entrance into the war was imminent.

Most American’s expected a war with Germany and her Allies, so it came as a shock when, on December 7, 1941, the Japanese attacked the US Fleet and nearby military facilities at Pearl Harbor. On December 10, three days after the United States was thrust into war, the Boston Navy Yard launched the destroyers USS Doran (DD-634) and USS Earle (DD-635). That same day, it began construction of two destroyers while work continued on another six that were nearing completion. A day later, December 11, Germany declared war on the United States. The United States Navy would now be fighting a two ocean war.

In the opening months of 1942, the situation looked very grim for the United States and her allies as the German and Japanese military claimed vast territories throughout Europe, Asia and the Pacific. Simultaneously, sea lanes of communication in the Atlantic, Mediterranean, and Pacific, were in danger of being cut off by the Axis powers. The United States Navy was fighting a two ocean war and needed more ships, including new types of vessels specifically designed for anti-submarine warfare and troop landings on distant beaches.

In January 1942, the Boston Navy Yard was selected as the building site for a new class of warship, the Destroyer Escort (DE). Boston was a logical choice, since the yard had specialized in building destroyers (DD) for a decade. Slightly smaller than the Fletcher-Class Destroyers then under construction in Charlestown, these escorts required far less time to construct at roughly half the cost. They were designed to protect merchant ship convoys and to destroy enemy submarines with an array of armaments. Some were built to serve in the Royal Navy as part of the Lend-Lease Agreement, but many would be retained by the United States Navy and see service in both the Atlantic and Pacific Theatres.

Charlestown Navy Yard: Before and after World War II 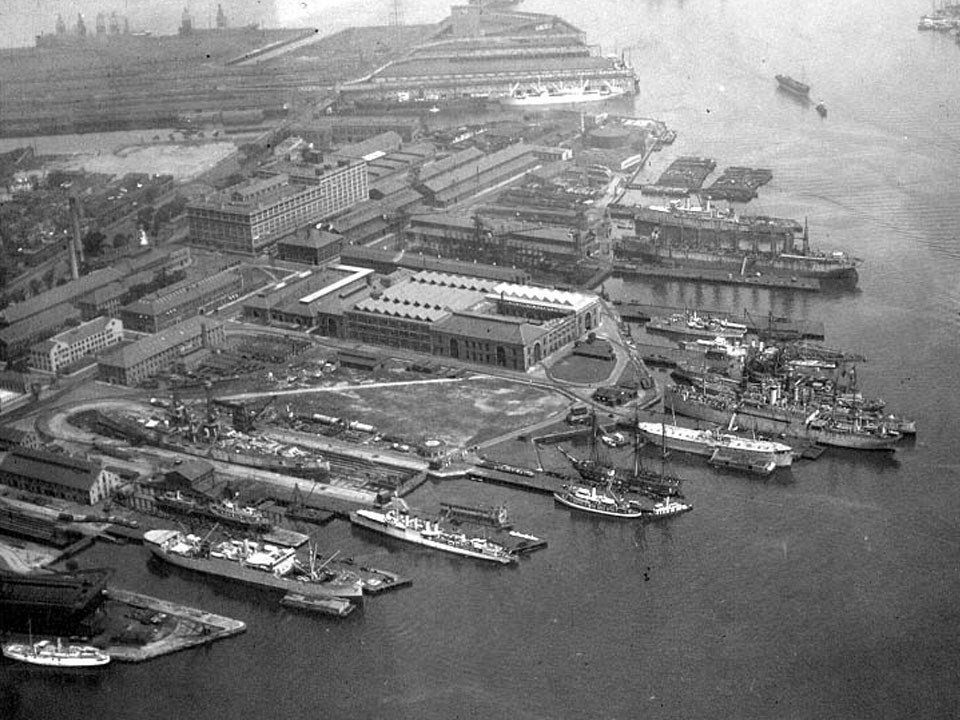 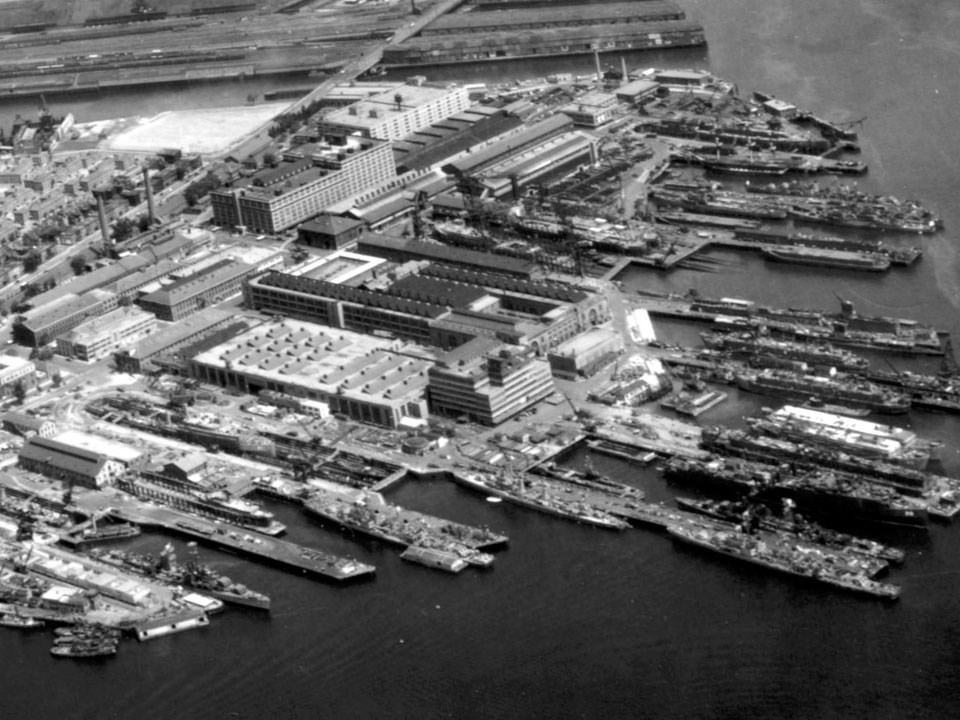 As the destroyer escort building program commenced in April, the Navy also selected Boston as the construction site for two types of landing craft for planned invasions on the Atlantic coast of North Africa, and at various locations in the Mediterranean and Pacific: Landing Craft, Mechanized (LCM) and Landing Ship, Tank (LST). LCM’s were shallow drafted boats, fifty feet in length that carried troops from transport vessels and land them directly on shore. LST’s were 328 feet long and could discharge water ballast, allowing them to enter shallow waters and beach. Tanks, vehicles loaded with ordnance and supplies, and the personnel to man them, could then be offloaded by means of bow doors and ramp. By the end of the summer, the Navy Yard had completed 150 LCMs. It completed the first LST in November and finished five more before the year’s end.

While the construction of new ships was extremely important, the overhaul and repair of vessels remained the top priority of Boston Navy Yard. The massive Dry Dock 3 at the South Boston Annex was capable of accommodating the largest ships that the US Navy and its Allies possessed. The adjacent Dry Dock 4 and a floating dry dock handled other large combatants, auxiliaries, and transports. The main yard in Charlestown and the Chelsea and East Boston Naval Annexes overhauled and repaired smaller vessels. Overhauls involved all manner of maintenance and upgrade, required an average of eleven days at the shipyard. By the end of 1942, 804 vessels had been overhauled or repaired.

Ship construction and repair at Boston Navy Yard peaked in 1943, with the workforce reaching an all-time high of 50,128 employees, including a large number of women and minorities. Throughout the year, the Yard led the nation in construction of destroyer escorts, breaking numerous launching records in the process. By end of 1943, more destroyer escorts had been launched from the shipways in Charlestown than any other shipyard, federal or private, in America. In total, forty-six destroyer escorts, eleven destroyers, and three LST’s were launched and nearly 900 vessels were repaired.

By 1944 the United States and its Allies had reclaimed many of the conquests of the Axis powers. The invasion of France and the steady advance across the Central and Southwest Pacific would liberate millions. The Boston Navy Yard began setting fast construction records for destroyers, destroyer escorts, and LST’s. Construction time for destroyers dropped from two years to as little as seven months, while destroyer escort construction dropped to slightly more than three months. LST construction time dropped from twelve to seven weeks, with one constructed in only fifty days.

The Navy Yard’s destroyer building program reached completion by the summer of 1944 and building programs for destroyer escorts and LST’s were approaching completion. Therefore, for the remainder of the war, production largely shifted to auxiliary vessels, including several Landing Ship, Dock (LSD) which were the largest vessels ever constructed in Charlestown. American warships and those of its Allies continued to be sent to Boston for repair after they were damaged in operations in the Atlantic, Mediterranean or Caribbean. Meanwhile, the Navy Yard overhauled and upgraded others for deployment to the Pacific.

For every year of the war the United States Navy awarded the Yard an “E” for excellence for the precision and quality of the work completed. Between September 8, 1939 when a limited national emergency was declared and the wars end in 1945, the Boston Navy Yard launched 303 vessels and commissioned another 120 ships that were constructed at private yards. In addition, it overhauled 1108 vessels; another seventy-four underwent extensive conversion, and 3260 were repaired. In the postwar, the shipyard largely reverted back to a ship repair and modernization facility, a role it fulfilled until its closure in 1974.