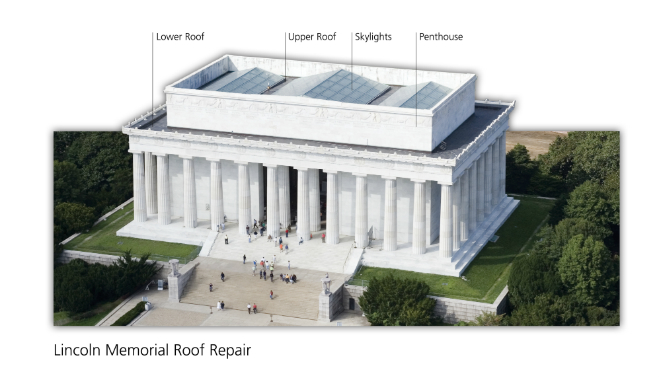 SUMMARY: The upper and lower roofs of the Lincoln Memorial are being replaced, and isolated cracks and fractures in the white marble at the four corners of the penthouse level are being repaired.

The flat upper and lower roofs of the memorial were last replaced 20 years ago and are starting to fail. Incoming water is staining the interior walls of the memorial, most noticeably on the southeast wall. A sound roof is one of the most important ways to protect and preserve a historic building, and the new roofs will be constructed with five layers to keep the interior dry and watertight. From interior to exterior, the roofs will be composed of: hollow clay terracotta tile, concrete decking, a hot rubberized asphalt membrane, rigid insulation and slate pavers.

The project will also repair the white marble at the four corners of the memorial's penthouse level, damaged during the 2011 earthquake. Overall, the condition of the stone is good, but there are isolated cracks and fractures requiring repair, as well as open mortar joints allowing moisture to penetrate. Broken glass in the skylights above the statue and the decorative metal and marble ceiling will also be replaced as part of the work.

Access to the front (east side) of the memorial, including the steps, chamber with the statue of Abraham Lincoln, exhibit area, restrooms and elevator will remain open to the public during the construction. However, for visitor and contractor safety, the north, west and south sides of the stylobate walkway (the base level of the memorial that the columns rest on) will be closed, as will the terrace level (grass and gravel path just below the columns). During the work, the lower roof and attic frieze will be covered by a white fabric tent-like structure that will be visible from ground level.

Staging for the $2.85 million Lincoln Memorial roof replacement and masonry repair project began on January 2, and the work is expected to be completed by late summer. This is the first phase of a $25 million restoration of the Lincoln Memorial, which will include expanded exhibit and public use areas, funded in part by an $18.5 million donation from businessman and philanthropist David M. Rubenstein.