Hi! My name is Ranger Melissa and Stockton Island is my summer “office”! I love when visitors join me for a hike along the Julian Bay Trail. I wish everyone could experience it. And now you can! Join me for a virtual hike to one of the Lakeshore’s most beautiful beaches. I’m so excited to share this special place with you!

Stockton Island looks very different today from when it started to form 12,000 years ago. At that time, it was actually two separate islands! Presque Isle Point was not connected to Stockton proper, hence the name “Presque Isle” which is the French term for “almost an island”. The land has been slowly rebounding since the retreat of the glaciers. Fluctuating water levels and sediment deposition over the millennia have created a land feature known as a tombolo (land bridge), which is arguably what makes Stockton Island so special and memorable to visitors.

From bare rock following the glaciers to the diverse ecosystem we see today, Stockton Island has experienced countless changes over the years and continues to today. So let’s begin our hike and discover the diversity of the tombolo.

The Apostle Islands are geographically situated where the northern edge of the temperate forest meets the southern edge of the boreal forest creating a diverse mix of hardwoods and conifers. We begin our hike on the west side of the tombolo where the land is more protected from Lake Superior, due to the nearness of other islands and the mainland, essentially creating a different microclimate. This part of the trail is dominated by different kinds of maple trees and a lush, green carpet of ferns. This is an important habitat for island mammals. The broad maple leaves provide dense shade and protection from wind and rain. A variety of fruit bearing plants and shrubs occupy the understory providing food for various species. This is one of five distinct plant communities that we get to experience along this short ½ mile trail!

Let’s continue to see what else makes this trail special.

“Wow! That’s a huge tree!” Have you ever thought that when passing an exceptionally large tree?
I often stop to take a photo or even give it a hug; maybe you do too? Have you ever wondered what the view from the top of that tree might be? Or what that tree has “seen” and lived through? Let’s take a moment and think about what standing in the same place for over 200 years might be like on Stockton Island: Close your eyes, imagine yourself sprawling your roots into the thin topsoil and standing tall for the birds to perch on you and the wind to disperse your seeds. Now imagine a Nor’easter is testing your strength or that lightning might strike during the storm. After all, you are one of the tallest trees in the forest. On a warm summer afternoon, an Ojibwe family takes a break from berry picking and finds respite in the shade of your great canopy. Maybe you can see lumberjacks beginning to set up camp in the distance and you wonder “will they come for me, will I be left all alone?” But you still remain. In your old age, your bark is thick and furrowed and has protected you from wildfires, bear claws, and the elements. And when it is finally time to fall to the forest floor, you will still be treasured as you provide homes for mammals, nutrients for plants, and a place for visitors to sit. The life of an old growth tree is anything but static.

So next time you find yourself in awe of a towering tree such as this yellow birch (Betula alleghaniensis), put yourself in its roots and imagine what it has experienced. And maybe give it a hug.

Let’s take a look at another (much smaller) long time island dweller.

Though many changes occur over time, some things remain a constant, like the fresh northern air. The mainland area surrounding the islands is sparsely populated and creates relatively little pollution. Certain plant species can only prosper in very specific environments. These are referred to as indicator species. The lungwort lichen (Lobaria pulmonaria) is one of these species and can be found on this trail. This leafy looking lichen indicates a rich healthy ecosystem but is sensitive to changing conditions. Often overlooked, a patch of lichen such as this lungwort serves as a reminder for us to do our part in caring for this precious environment.

At this point along the trail we start to notice more evergreen trees such as cedar, pines, balsam fir, and even hemlock! This is the far northwestern range for eastern hemlock (Tsuga canadensis) trees. They thrive here due to the cool, yet humid marine environment. Many of the islands, including Stockton, were logged during the late 19th and early 20th century for their eastern hemlock and eastern white pine (Pinus strobus) lumber. The forest we see along the Julian Bay trail today is considered second generation. But that’s not to say you won’t find some very large trees like we did early on during our hike. Some of the islands even have remnants of truly old growth forests.

As the climate continues to warm, it’s likely that more of the island could start to resemble the temperate forest at the beginning of our hike and lead to the loss of iconic northwoods trees. As far as evergreens go, hemlocks can grow as far south as the state of Georgia, so likely won’t be affected as rapidly as other evergreen species.

Always a treat, the prehistoric-sounding call of a sandhill crane (Grus canadensis) sometimes startles hikers who aren’t familiar with this large bird. Stockton is home to a pair of nesting sandhill cranes. The unique bog-lagoon-dune area along Stockton’s tombolo provides ideal habitat for these massive birds. Though their croaking call can be heard from miles away, they wander about the tombolo quietly hunting seeds, berries, small vertebrates and invertebrates. Come fall, their tracks will slowly fade away in the sand and their calls are but an echo as they migrate south for the long winter.

Just as migrating birds come and go, wildflowers seasonally bloom. Now that we are in more of a mixed hardwood/boreal forest where sunlight more easily penetrates the canopy, we start to see more diversity on the forest floor. Throughout the seasons, leaves emerge, flowers bloom, flowers are pollinated, fruits are produced, and seeds disperse. Since different species bloom at different times, the Julian Bay trail is constantly changing underfoot.

Because of the varied habitats of the tombolo, you can find hundreds of interesting plants including rare orchid species and carnivorous plants! We’ll get a bird’s eye view of these habitats at our next stop.

Here we have a great vantage point looking up the spine of the tombolo which allows us to travel way, way back to when the two islands started to merge. To the west (left), the wooded campground area made up of red pine and mixed hardwoods begins to transition to a low-lying bog environment. Ground core samples tell us that this area formed about 6,000 years ago. Peeking out in the distant center of the photo is another unique environment, a freshwater lagoon. To the east (right) is one of Wisconsin’s finest examples of a pine savannah. Only a half mile from the 6,000 year old campground area, the savannah is believed to have formed only 800 years ago! Geologic time is often hard to grasp, but this panoramic overlook allows us to time travel and peer across what was once open Lake Superior and see 6,000 years worth of ancient shorelines come together creating the renowned Stockton Island tombolo.

From here we will make our way to the current shoreline of Julian Bay. 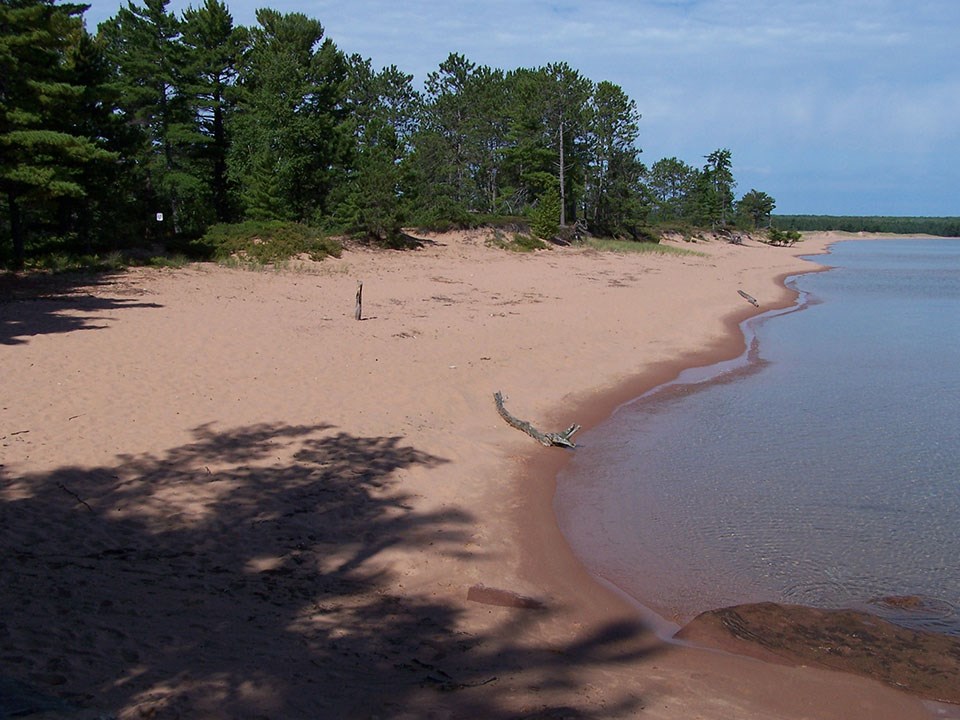 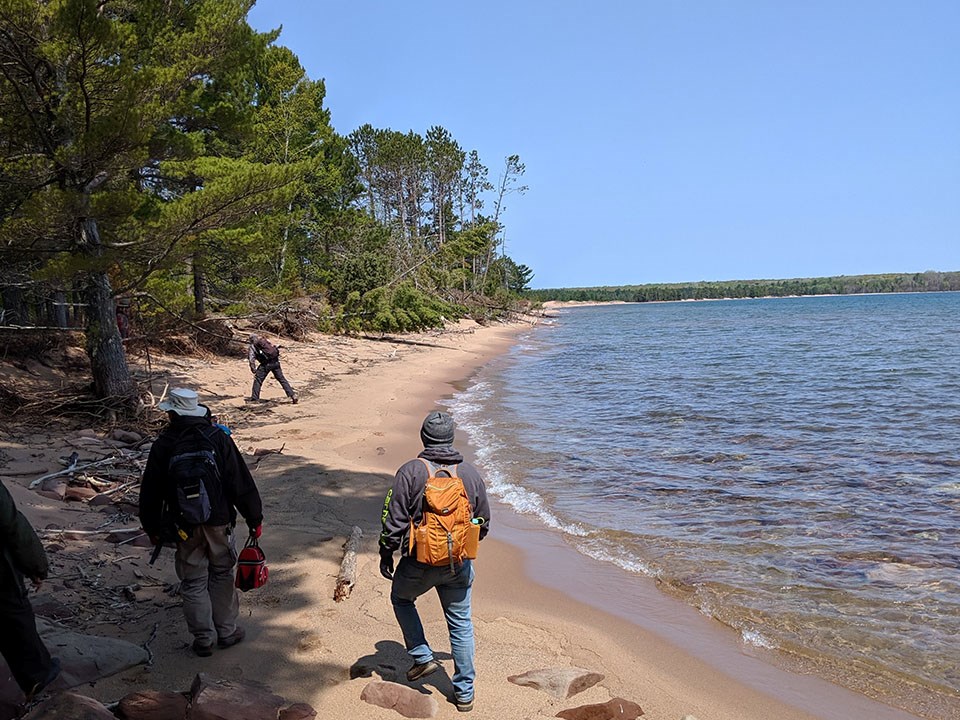 Not all changes take so long to be made. In fact, many Stockton Island visitors notice drastic changes in the landscape during their lifetime. For example, the Presque Isle campground is losing campsites due to rapid erosion. Fluctuating water levels, large waves, and strong winds are eating away at the Julian Bay beach and dunes. As climate continues to change, scientists predict stronger and more frequent storms which could speed up the process of erosion. The dunes provide critical habitat for a variety of species including Wisconsin’s most endangered bird, the piping plover (Charadrius melodus).

In order to protect the plovers and their habitat, it’s important to either walk on the open beach or along the boardwalks to avoid trampling beach grasses and other plants. For this same reason, be sure to keep pets leashed at all times when exploring Julian Bay, so we can all continue to appreciate its wonder.

What makes this trail unique is the diversity of ecosystems in such a short walk. Maybe you've hiked to Julian Bay many times or perhaps this virtual visit is your first. With thousands of years of change in just 1/2 mile, there is something for everyone. At the overlook, we saw a glimpse of the lagoon, which is my favorite part of the tombolo, because of all the cool plants and critters that can be found there. You might be inspired by something else, perhaps the call of a sandhill crane, hugging a rugged, old tree, or spotting your first orchid. No matter your pleasure, this special place is here for you, ever changing, always rewarding.