In the age of satellite imagery, is there still value in documenting glacier movements the old-fashioned way?

William O. Field of the American Geographical Society devoted his career to documenting the changing glaciers in Glacier Bay. From his first trip in 1926 to his last in 1987, Dr. Field took thousands of photographs from some 80 photo stations in the bay. Between trips he painstakingly archived the photo collection, which he donated to the University of Alaska in Fairbanks shortly before his death in 1994.

The catastrophic retreat of ice from Glacier Bay is perhaps the best documented glacial retreat in the world. The earliest scientific photos were taken by George Frederick Wright in 1886. Harry Fielding Reid established photo stations in 1890 and 1892. These were continued by William O. Field, who added many more stations as the glaciers retreated. Other researchers and surveyors also contributed over the years.

This remarkable photographic record was of great interest to Fabiano Ventura of the Italian non-profit Macromicro. His 10-year project “On the Trail of the Glaciers” is following in the footsteps of early photographers, replicating historic photos of glaciers in six different mountain ranges to provide visual evidence of glacier changes world-wide. The crew completed expeditions in 2009 in the Karakorum Range and in 2011 in the Caucasus Mountains. The only location in North America, Glacier Bay National Park, was visited in the summer of 2013. An additional three expeditions are envisaged: the Andes in 2015, the Himalayas in 2017, and the Alps in 2019.

Glacier Bay’s tidewater glaciers provide a contrast to the other locations, and a challenge to the assumption that glaciers are reliable indicators of climate change. While documenting climate change effects is a major focus of the project, the crew understands that the dynamic interplay of ice and sea is a complicating factor in Glacier Bay. Johns Hopkins is the only advancing glacier the crew has encountered.

In making a contribution to the tradition of glacier photo-documentation, “On the Trail of the Glaciers” combines art, science, historic preservation, environmental activism, and respectful tribute to the pioneers who came before.

The crew spent a year researching and selecting high-quality photos with particular esthetic and scientific value. They chartered a boat to travel into Glacier Bay and hiked overland to locate the exact spots from which the selected photos had been taken earlier. They then used a large-format (4”x5”) film camera to capture the best possible photograph. Digital photos were also taken and geo-referenced, allowing for easier future replication. The project enjoyed extremely fortunate weather in 2013!

Macromicro will produce a series of public events, participate in scientific conferences, organize a traveling photographic expedition, and produce documentaries on each of the expeditions. A Powerpoint presentation on the Glacier Bay project is available on the park network. 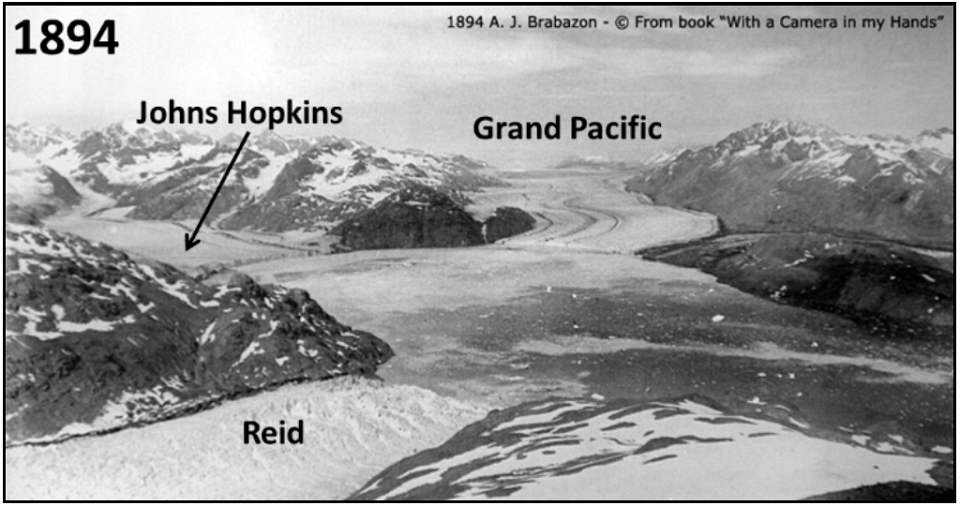 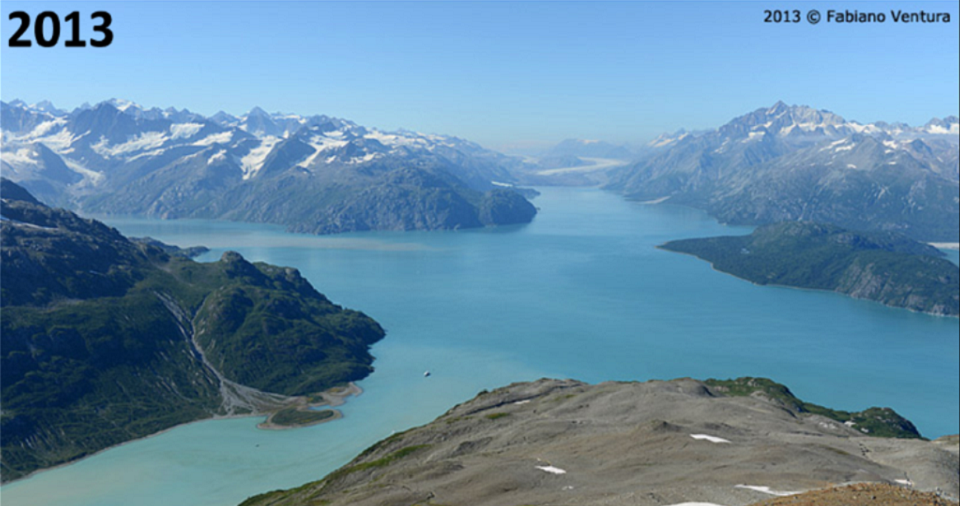 Left image
The 1894 photo was taken by A.J. Brabazon, a Canadian member of the U.S.-Canada Boundary Survey expedition.
Credit: Many valuable photographs were produced by the survey, which was undertaken to resolve a dispute about the exact location of the international boundary between Southeast Alaska and Canada.