The George Mason Memorial is located south of the Tidal Basin near the eastern approach to the Inlet Bridge in West Potomac Park in Washington, DC. Dedicated in 2002, the memorial commemorates Virginia statesman and Founding Father George Mason. Prior to construction of the memorial, the site was known for its association with Fountain No. 4 as well as planting beds composed of thousands of pansies ringed by a golden hedge of forsythia.

The garden was set amongst a collection of saucer magnolia (Magnolia x soulangiana) and an array of other flowering tree species, including the iconic Japanese cherry trees located adjacent to the Tidal Basin. Notably, Fountain No. 4 was one of four fountains that was historically associated with a nearby 50-acre nursery and rose garden. Today, Fountain No. 4 remains as one of the oldest features within West Potomac Park.

Read on to learn more about the historical development of the garden and the enduring forsythia hedge.

Constructed in 1905 as part of a larger nursery and rose garden development, Fountain No. 4 was one of four fountains that was built by the Office of Public Buildings and Grounds (OPBG) in the newly developed Potomac Park. The nursery was established by the OPBG to propagate shrubs and trees (both deciduous and evergreen), perennials, and rosebushes that would be used to supply plant materials for the parks under its purview (HALS DC-59). An early map of Fountain No. 4 from 1906 illustrates “flowering shrubs” around the fountain. It is not known if the flowering shrubs were forsythia; however, it is of interest to note that, “no forsythia species was common in cultivation until about 1850 and it was not until 1908 that the first outstanding horticultural variety was imported into the United States” (DeWolf and Hebb, 1971).

Just over fifteen years later, in 1917, an annual report of the OPBG reported that a heavy planting of forsythia and other shrubbery was transplanted from the shores of the Tidal Basin to other locations around the District of Columbia, which suggests that forsythia was already well-established around the Tidal Basin and presumably in proximity to Fountain No. 4 by that date.

After serving as a garden space with Fountain No. 4 at its center for nearly twenty-five years, in 1931 a “Plan to Revise the Pansy Garden” was prepared in anticipation of the George Washington Bicentennial celebration. By November 1931, a total of 120,000 pansy plants had been set out in the “great beds”. It is possible that a forsythia hedge had already been established in the garden by this time. During this period the garden served as a popular attraction for many visitors who were viewing the nearby cherry blossoms. A visit to the garden also served as an annual tradition for some as evidenced by the Washington Post which reported in March 1942 that,
old residents are watching anxiously the road work near the end of Long Bridge, for nearby lies the great circular beds of pansies to which many old timers make an annual pilgrimage. The destruction of this spot would be a disappointment to many who yearly enjoy the pansy bed and its accompanying forsythia (Pozer).

To the dismay of many local residents, after four decades of use and enjoyment as a public space, the nearby evergreen nursery and rose garden, along with the other three fountains, were demolished in 1947 to make way for construction of the Fourteenth Street Bridge, which provides access over the Potomac River to Virginia.
Despite encroaching highway development throughout the years, Fountain No. 4 and the pansy garden continued to serve as a showplace during bloom season for several decades with displays of pansies, magnolia, forsythia, tulip, camellia, and jonquil. Often the gardens were illuminated to provide visitors with a special opportunity to enjoy the splendor of the gardens at night. In 1966, as part of Lady Bird Johnson’s beautification program in Washington, DC, a total of 26 new forsythia (‘Lynwood gold’) were planted along the eastern edge of the garden breathing new life into the extant forsythia hedge and thereby continuing the precedent of planting forsythia at the site.

By the early 1990s, the historic character of the Pansy Garden remained largely unchanged apart from modifications to some of the plantings in an effort to reduce maintenance. The planting beds immediately surrounding Fountain No. 4 contained seasonal displays, while the hedge that served to contain the garden was composed of forsythia and red-osier dogwoods. The George Mason Memorial (designed by Rhodeside and Harwell of Alexandria, Virginia) was sited in the garden and dedicated in 2002. The extant forsythia hedge was preserved and incorporated into the design, despite its “leggy” appearance. Recent rehabilitation efforts completed at the site by the National Park Service in the partnership with the Trust for the National Mall in 2019 have also made a concerted effort to preserve the forsythia and maintain the historic precedent for these plantings. Old timers from years past would be delighted to witness the enduring legacy of the forsythia hedge at Fountain No. 4.

The genus is named after William Forsyth (1737-1804), an eighteenth-century Scottish botanist and one of the seven founding members of the Royal Horticultural Society. Forsythia is one of the first shrubs to flower in the early spring and is characterized by bright yellow four-petaled flowers that emerge before the foliage. It is often used as a spring accent or informal barrier hedge.

As a member of the olive family forsythia suffers from few disease or pest problems. It is relatively easy to grow and thrives in well-drained soils in the full sun but is also adaptable to poor and compacted soils. Forsythia is a vigorously growing shrub that requires regular pruning to maintain its form. Given the right growing conditions, it can grow approximately six to nine feet high. Because of its vigorous growth forsythia makes an excellent shrub for privacy or as a hedge.

Forsythia produces its bright yellow flowers on the current season’s growth. To maximize bloom the following season, it is important to prune the shrub after it is finished flowering, but before mid-July. In most cases, the shrubs can be pruned with hand pruners and/or limb loppers. Several strategies can be used to prune an overgrown forsythia including a phased approach that incrementally removes the oldest branches of the shrub over the course of three years. A more aggressive approach can also be utilized, which includes pruning the branches to the ground and allowing the shrub to resprout. This form of total rejuvenation can be completed every three to four years. 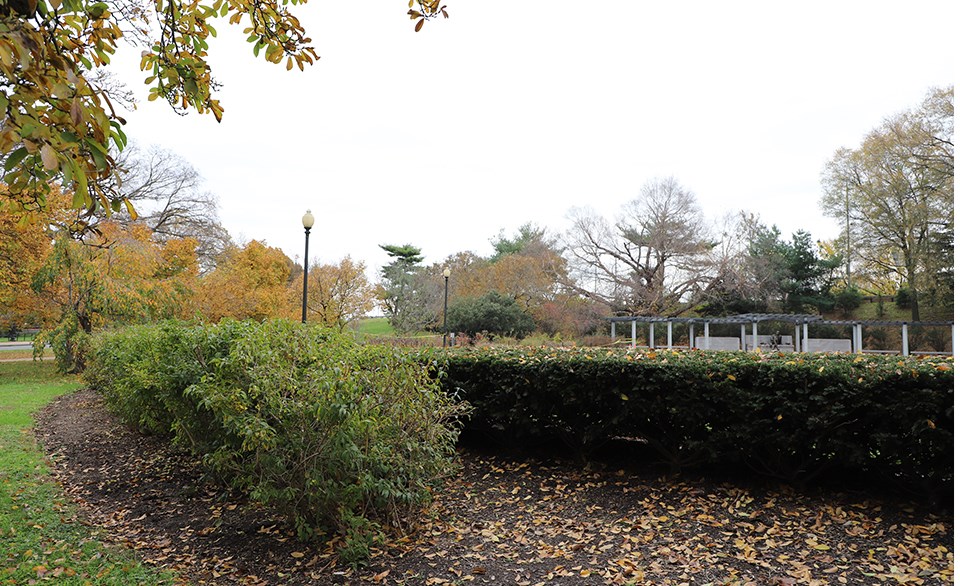 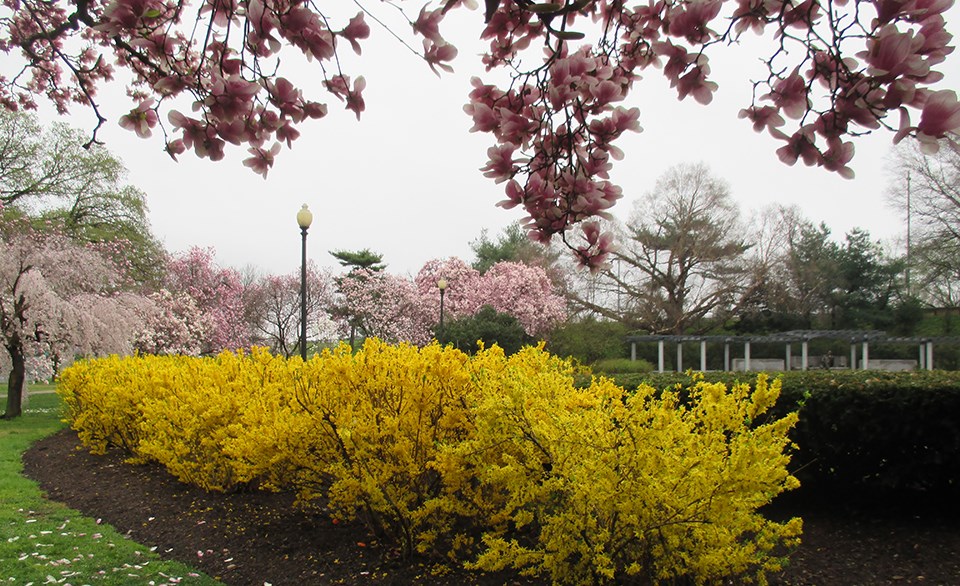 Bromwell, Chas. S. Annual Report Upon the Improvement and Care of Public Buildings and Grounds, And Care and Maintenance of the Washington Monument, in the District of Columbia, Being Appendix EEE of the Annual Report of the Chief of Engineers for 1906.

University of New Hampshire Cooperative Extension, When and how do you prune an overgrown forsythia? | UNH Extension