Of all the invasive plant species at Acadia National Park, Japanese Knotweed (Fallopia japonica s.l.) may be the most unique. Imagine a plant that can burst through pavement or sneak in through foundation cracks in your house! Their invasions tend to be sudden and aggressive, making them successful almost globally. They can usually be found in areas that are heavily influenced by human activity, such as roadways, trails, and construction sites. These areas provide it with the large amounts of light that it needs to thrive, and disturbance of the topsoil allows its complex root system to form. Once established, the plant may grow 10 feet in one growing season, making them very easy to spot.

The stalks of Japanese knotweed have been compared to those of bamboo, hollow and segmented, though the plant is actually in the buckwheat (Polygonaceae) family. The leaves are broad, complete, and alternating. The stems tend to take on an orange color once mature, while the leaves are dark green. Each individual stalk flowers at the end of the summer growing season, producing clumps of small, white flowers. After fruit is produced, the stalks are killed off by the first frost of the fall season, however they quickly return from rhizomes below them come spring.

The earliest recording of Japanese knotweed arriving in North America was in the 1800s. Like many of the invasive plants in North America, it was originally used for ornamental and privacy purposes in domesticated gardens. It’s flowers and height were attractive to those looking for dense coverage along roadsides. Japanese knotweed is native to Asian countries, primarily Japan, China, Korea and Taiwan. It is currently one of the most invasive plants in the world and is thought to be found on every continent besides Antarctica.

Why Is It Invasive?

Japanese knotweed grows in dense stands and reaches incredible heights very quickly. This makes it almost impossible for herbivores to feed on or trample it to keep it under control. Its roots are also incredibly hardy and the only way to permanently remove a stand of Japanese knotweed is to completely dig out and remove its rhizomes, a nearly impossible feat. In addition, its fruits are very small and easily spread by waterways and the wind. It is often still planted in gardens by those who are unaware of the damage it can cause, making management a continuous battle.

Like most invasive species, Japanese knotweed is detrimental to its surrounding environment. Although it can appear self-contained at first glance, it is an ever-expanding issue. Growth of new stands blocks out sunlight for native plants below, and since the weed must grow very quickly to do this, it consumes large amounts of minerals and nutrients from the soil. This limits the resources available to nearby species, wiping them out. All this limits biodiversity, which is one of the main reasons that Japanese knotweed is so undesirable within the park.

The invasive plant management team (IPMT) at Acadia National Park are actively managing stands of Japanese knotweed on parklands. This is done mainly through yearly cutting of stalks and the application of herbicides to regrowth from rhizomes. There is hesitation to fully dig up the root systems as this may damage native plants, increase soil disturbance, and is very time consuming. It is also rare that this approach would actually end in complete removal, as even one root fragment left behind is able to grow new stems. The IPMT regularly welcomes volunteers out to the park to help with mechanical removal of stands. We are also continually monitoring for new stands growing along trails and roadsides. We are most successful when small knotweed stems are found early on and require fewer treatments to gain control.

You can report any sightings of Japanese knotweed within the park to Jesse Wheeler, Acadia’s Vegetation Program Manager. Residents of Mount Desert Island and the surrounding areas are also urged to avoid planting Japanese knotweed for decorative purposes, and instead choose from native plants and shrubs. We encourage property owners to remove Japanese knotweed, as their seeds and root fragments in contaminated soil can travel great distances, invading new areas. Proper excavation practices are also encouraged, as this could decrease the chances of a stand growing in and around constructions sites. 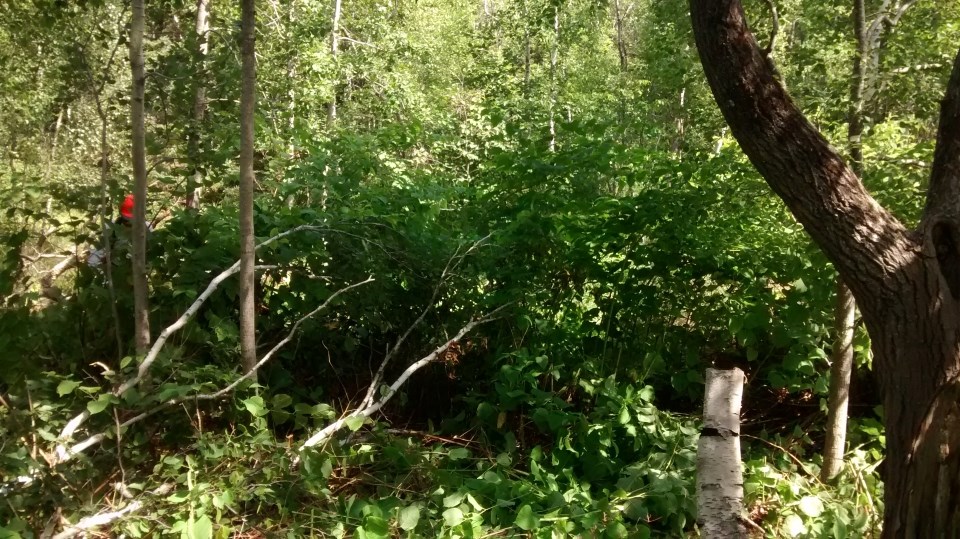 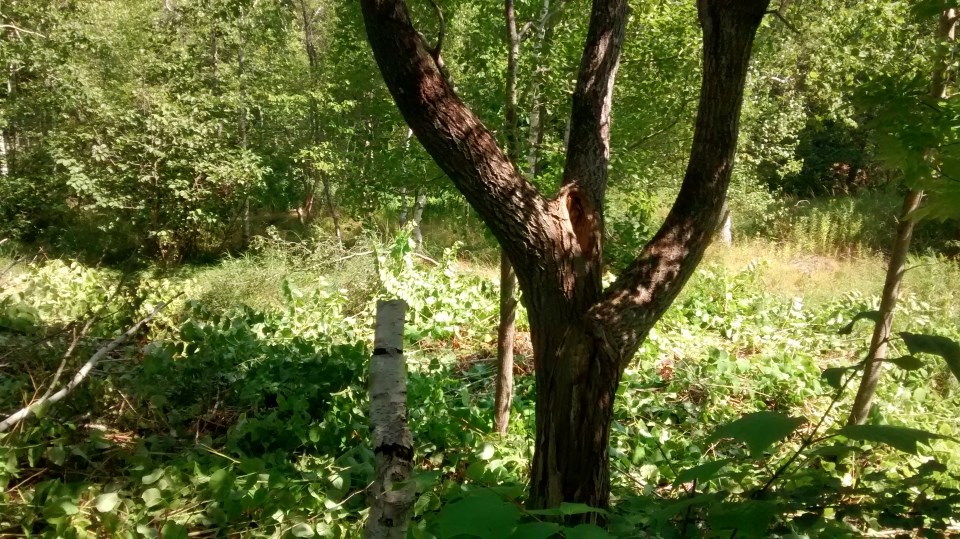 Two images showing before and after mechanical removal of Japanese Knotweed at the Saterlee Pit near the Acadia National Park Native Plant Nursery. This is a good example of invasive plant management within one season.