A marine heatwave in the North Pacific had widespread, detrimental impacts on ecosystems and species. Why were some more resilient than others?

An extreme marine heatwave occurred in the north Pacific Ocean between 2014 and 2016. Marine and coastal parks from southern California to Alaska were affected, including Kenai Fjords National Park and Katmai National Park and Preserve. The Gulf of Alaska experienced some of the most severe impacts. Unusually warm and long lasting, the scale of this event was unprecedented. It was the largest marine heatwave recorded on the planet in the past decade. The effects on marine life were widespread and persistent. Pelagic—offshore, open water—predators like seabirds and whales starved. Nearshore biological communities, known for their diversity, became more homogenous. But some ecosystems and species were more resilient than others. Research and long-term monitoring by the National Park Service’s Inventory and Monitoring Program, in partnership with Gulf Watch Alaska, helps us document and understand these varying effects.

Measuring Change in a Fluid World

You may have experienced atmospheric heatwaves where the air becomes abnormally hot. Marine heatwaves are similarly anomalous events where the temperature of ocean water is abnormally high over a long period of time in a given area. The number of these events across the world’s oceans has increased in recent decades. Marine heatwaves can vary in their intensity, duration, and geographic extent. Studying the response of biological communities to heatwaves can tell us something about which species are the most resilient.

Oceans are three-dimensional, fluid environments driven by physical processes like wind and currents. Conditions can vary cyclically or randomly over time. Physical conditions may be more stable in some places and highly variable in others. This causes corresponding variation in biological communities. Climate change is leading to shifts in ocean conditions, such as increased ocean temperatures and decreased salinity, compounding this natural variability. Different marine species may respond to changing conditions positively or negatively. Such complexity makes their responses harder to predict. One way to understand how all these layers of complexity interact is by studying how ecosystems respond to perturbations.


Gulf Watch’s research is designed to find links between environmental factors, the pelagic ecosystem, and the nearshore ecosystem.

Gulf Watch Alaska is a long-term monitoring project that brings together over 30 scientists from federal and state agencies, universities, and other organizations, including the National Park Service, to monitor changes in the marine ecosystem. Gulf Watch Alaska’s success at finding out why changes occur is due to its study design. Gulf Watch’s research is designed to find links between environmental factors, the pelagic ecosystem, and the nearshore ecosystem. It measures physical properties like temperature, salinity, and the biological components of pelagic and nearshore food webs.

These two food webs are distinct: Phytoplankton—microscopic marine algae—largely drive the pelagic food web, supporting forage (prey) fish, seabirds, and whales. In addition to phytoplankton, kelps and seagrasses drive the nearshore food web and support clams and mussels, shorebirds, and sea otters. The Gulf Watch study design integrates the biological and physical components, which allows us to examine ecosystem changes and the potential causes of those changes. This holistic approach is not often found in long-term monitoring programs. 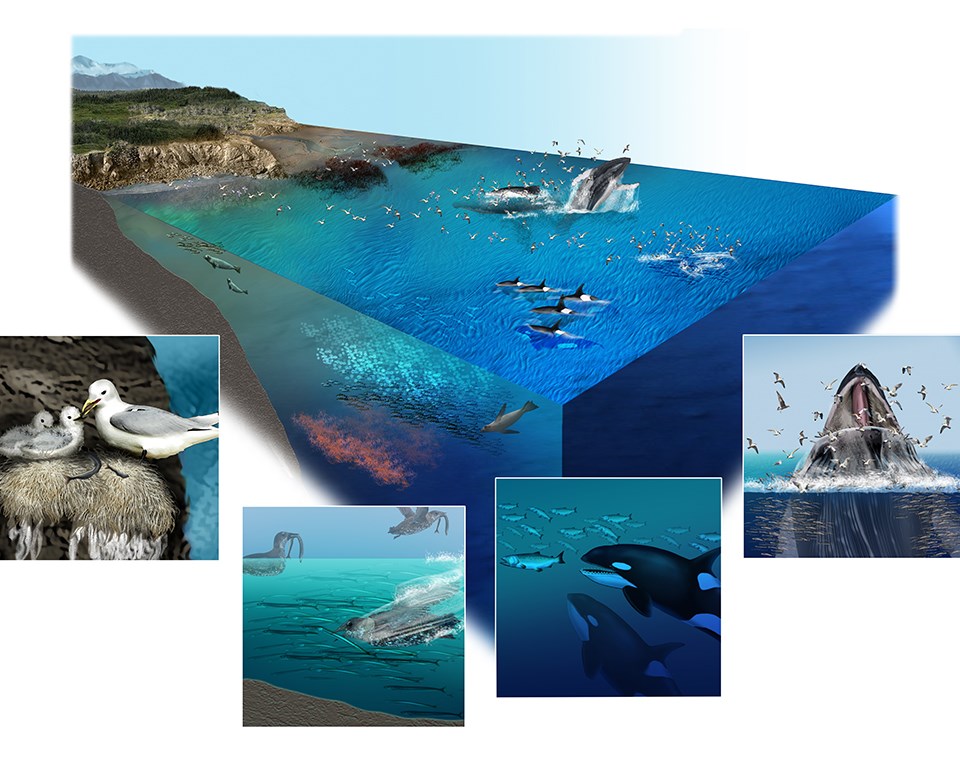 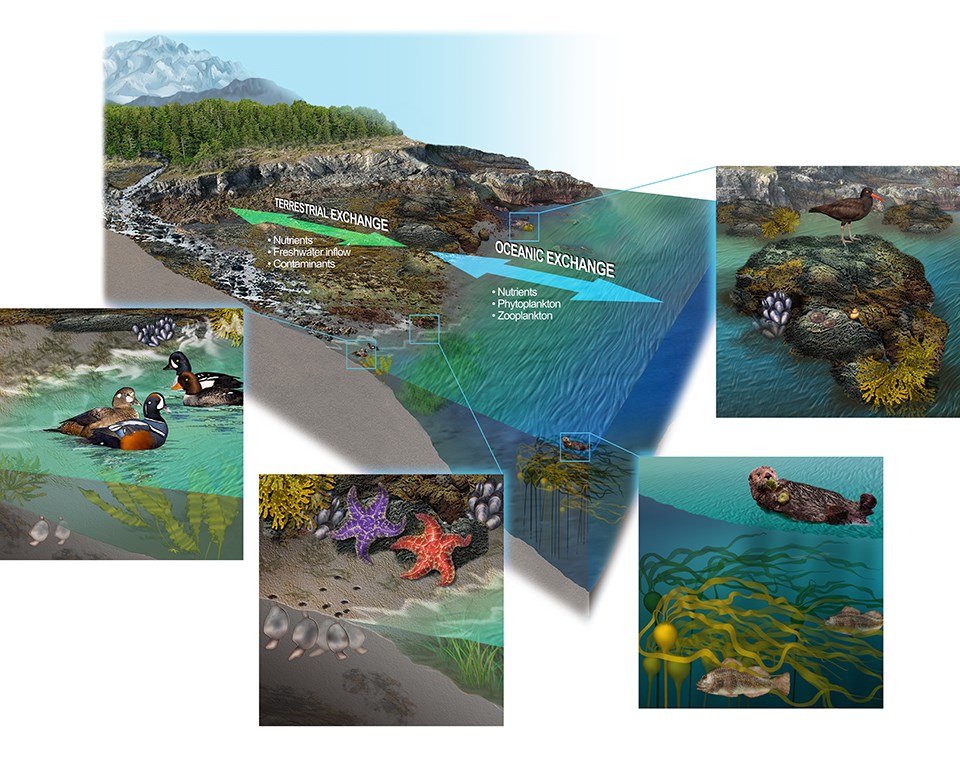 A comparison of the pelagic environment (top) with the nearshore environment (bottom). Move the slider up or down to see the different environments.

Gulf Watch Alaska’s research shows that pelagic food web responses to the heatwave were dramatic. In the North Pacific, forage fish species develop and mature at different times. As a result, their predators, such as seabirds and whales, can experience fluctuations in one forage fish population or another and still have adequate food resources. But the heatwave was so great that multiple forage fish species collapsed concurrently. This caused many seabirds, marine mammals, and fish to starve. Several biological shifts attributed to the heatwave persisted for at least five years after its onset.

Nearshore species responded to the heatwave in different ways. Some populations increased, some declined, and some remained stable. The intertidal zone within the nearshore system experiences a wide range of temperature, salinity and other physical conditions due to rising and falling tides. Nearshore organisms are thus already adapted to these highly variable conditions and are more resilient to certain types of perturbations. In general, local conditions determine the composition and spatial organization of these rocky communities. But the Pacific marine heatwave was likely strong enough to override local drivers such as fetch, substrate, and slope, which can dictate community composition. The Pacific marine heatwave likely started a cascade of events that culminated in shifts in the structure of the nearshore environment too.

We measured nearshore community responses to the heatwave at our rocky intertidal study sites across the Gulf of Alaska. These highly diverse sites span from Prince William Sound, east of Kenai Fjords National Park, and continue west across Cook Inlet to Katmai National Park and Preserve. We found that these sites were becoming less diverse. They were shifting from macroalgae (“seaweed”)-dominated communities to ones dominated by macroinvertebrates.

Rockweed, one of the primary macroalgae in the rocky intertidal in the Gulf of Alaska, had been replaced by mussels and barnacles. A concurrent decline in one type of mussel predator—sea stars—likely also contributed to the increase in mussels. Sea stars, a keystone species in the intertidal, suffered significant losses. This was probably because of sea star wasting disease, which can be more severe in warmer waters. It isn’t clear when (or if) the system will return to what it was before the heatwave.

The increase in mussel abundance led us to think that species that rely on mussels as a food source, like sea otters, sea ducks, and black oystercatchers, might become more abundant. In fact, sea otter populations did not grow or shrink in response to changes in prey abundance from the heatwave. But our preliminary analysis of sea otter diet and foraging in Katmai National Park and Preserve indicates the otters shifted to a more mussel-rich diet.

Unlike sea otters, black oystercatcher numbers increased in the eastern and western Gulf of Alaska following the Pacific marine heatwave. But this increase wasn’t driven by changes in diet, which means other factors besides food may have influenced black oystercatcher populations. Other mussel-reliant marine bird populations did not change.

We plan to continue tracking species and community changes over time. Long-term monitoring allows us to establish baselines—conditions used as a basis for comparison—while concurrently analyzing responses during perturbations. How long these perturbations will last or with what frequency or intensity they will occur remains unknown. Dan Esler is a research wildlife biologist at the U.S. Geological Survey Alaska Science Center. “Differences in responses to the [Pacific Marine Heatwave] across food webs highlights the differing mechanisms, consequences, and vulnerabilities to climate variation by different parts of marine systems,” Esler said. “Understanding these will be critical when predicting the future of Alaska’s marine ecosystems and the values they provide.”

Heather Coletti is a marine ecologist with the Southwest Alaska Network in the National Park Service’s Inventory and Monitoring Program. She has studied nearshore ecosystems in the Gulf of Alaska for over 20 years. Image credit: NPS