Boston National Historical Park is planning a multimillion-dollar restoration of the Dorchester Heights Monument atop Telegraph Hill in South Boston with funding from the Great American Outdoors Act (GAOA). This project will restore the 115-foot-tall marble commemorative tower, which was designed by Peabody & Stearns architects of Boston in 1899 and constructed in 1901-1902. It will also replace all hardscapes within the surrounding 5.43-acre grounds around the tower, known as Thomas Park. With completion of this project, the iconic tower and grounds will be safe and accessible for visitors and continue to serve as a landmark within the local community.

The Dorchester Heights Monument commemorates the fortification of those Heights on the evening of March 4, 1776. After months of planning, George Washington ordered continental forces and local volunteers to stealthily fortify this location with cannon. This military operation led British forces to evacuate Boston two weeks later, on March 17, 1776. Since that historic moment, Dorchester Heights has remained a significant site to the local community and the nation.

Project at a Glance: This multimillion-dollar project will restore the 115-foot-tall commemorative tower, as well as replace and upgrade the hardscape of the surrounding 5.43-acre grounds known as Thomas Park so that they are safe and accessible to all.

What are the Benefits: This multi-year project will renew the Dorchester Heights Monument as a safe gathering place for visitors and the local community. By addressing the deteriorated conditions of the tower and hardscape, visitors will be able to safely explore the grounds. The tower observatory will be accessible for special events and as staffing allows. In the observatory, visitors will be able to survey the commanding views of the city and Boston Harbor, which made this site a decisive factor in Washington's first victory in the nation's War for Independence.

Visitor Impact: It is anticipated that the tower and surrounding grounds will be closed to the public for approximately 18 months during construction.

*These are estimations and subject to change

There are two aspects to this project: restoration of the commemorative tower and reconstruction of the surrounding hardscapes. Each play an integral role in making the park a safe place for visitors. This work includes: 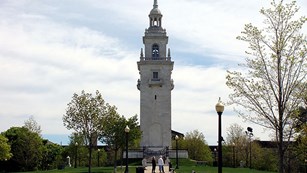 Learn more about the restoration project at this national and local site. 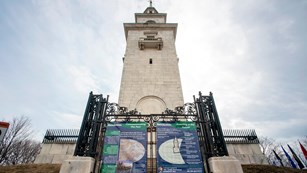 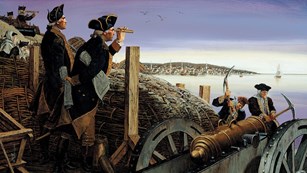 Explore the past, present, and future of Dorchester Heights.