Through time and change, the forests of Concord, Massachusetts have influenced the development of a young nation. The forests sustained Indigenous peoples and were sought after for their economic use by early colonists. Despite their near eradication, they influenced great American authors and rebounded into the 21st century. Today, despite widespread coverage, the forests continue to face challenges.

Concord was probably settled by colonists for the same reasons its Indigenous inhabitants settled the area millenia prior. It sits near the convergence of two rivers, and is underlain by fertile glacial soil. Here, the colonists found a forest that been managed for at least a thousand years before colonial settlement. The native peoples of Musketaquid, what is now known as Concord, optimized forest resources through controlled burns to enhance agriculture practices, living areas, desirable native species and foraging game.

The forests of pre-colonial southern New England were therefore a mosaic of forest types in diverse developmental stages with high plant diversity. Animals such as deer, elk, moose, wolf, bear and beaver would have been present in the 17th-century forests of New England.

Colonists replicated their European way of life, centering homes around a common meeting house and clearing forest around the settlement. Subsistence farming and animal husbandry sustained the early families. A heavy demand for fuel, clear plots of land, and lumber put pressure on local forests. It is estimated that each family needed 61 tons of wood per year. Concord, which had been 90% forested in 1635, was only 70% forested by 1700.

As Concord grew in population, this trend continued. In 1775, during the battle of Lexington and Concord, the town was only 30% forested, with large tracts of land cleared for agriculture. By the mid-19th century, only 10% of Concord was covered with forest. The Concord that Thoreau in the 19th century knew was much different than the Concord of pre-Colonial settlement, and even the Concord of today.

In 2017, researchers conducted an investigation of the pollen content in soil at the Fiske Hill area of the park. David Fiske occupied the land from the 1650’s until 1710 and was thought to establish one of the first homesteads of the Fiske Hill region. Palynological (pollen) evidence shows that beech trees were selectively cleared from the land before the land was clear cut for pasture. This physical evidence echoes the well-documented sentiment of colonial landowners that beech trees degrade the quality of land.

By the late 19th century, the agricultural economy had shifted westward. This, along with the rising popularity of coal as fuel for homes, took pressure off of local forests. The forests of Concord, and much of New England, were allowed to return through the late 19th and 20th centuries.

This took place in a series of successional stages. First, the hardy seeds of white pine colonized much of the abandoned agricultural areas. These monoculture forests were then populated with young hardwoods that established themselves among the stands of white pine. Forest development over 100 years has led to a diversity in tree ages and types. 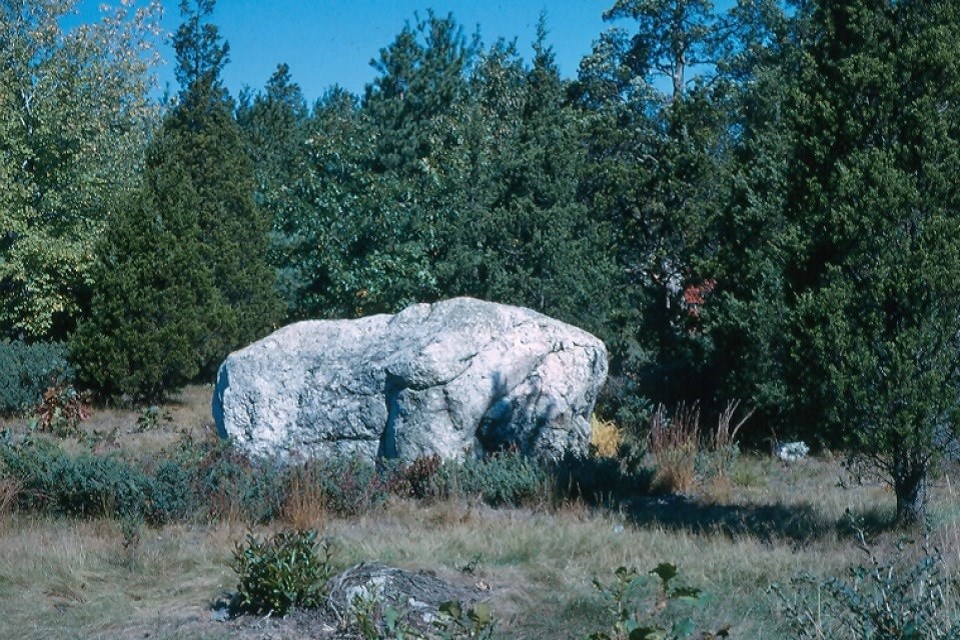 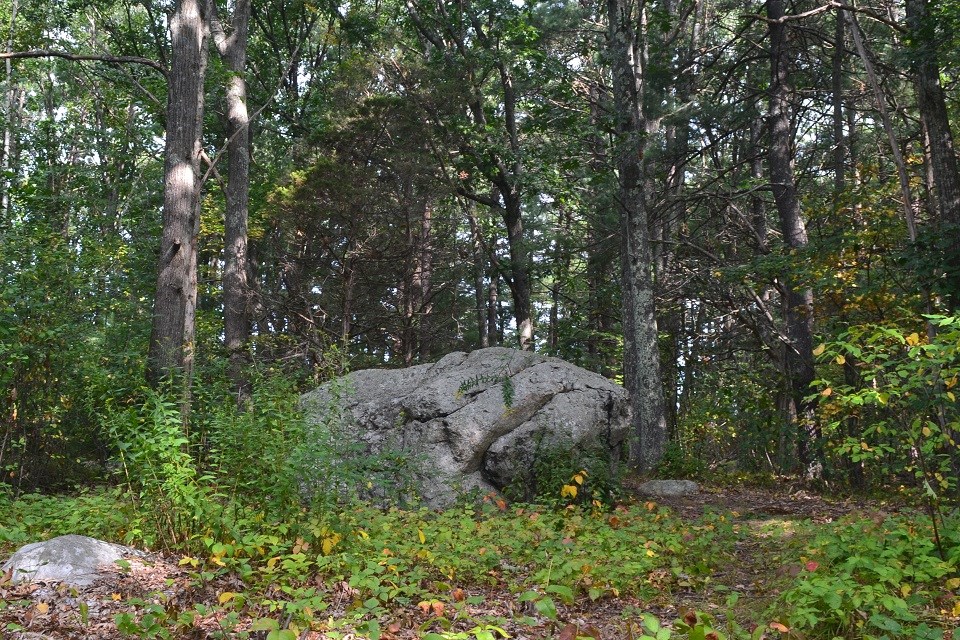 Left image
The Minute Man boulder once stood in a clearing of trees.
Credit: NPS photo

Right image
Approximately 50 years of forest development has swallowed the once clear meadow which the boulder stood in.
Credit: NPS photo

Today, the park is approximately 50-60% forested. The land cover over the 1,040 acres of park land alternates between forest, open grassland, swamp, and urban development. As with many successional forests of New England, the forests of Minute Man are composed primarily of hardwoods, with maples, oaks, ashes, and birch dominating the landscape. Minor stands and interspersed white pine and other conifers are present, as well.

Some, but not all animals have returned to the forests of Concord. Commonly spotted are whitetail deer, coyote, fox and beaver. Evidence of bear has also been observed. The wolf, elk and moose have not returned.

Because cleared land could revert to forest beginning 170-100 years ago, many forest areas of New England are reaching a later successional stage, where extensive stands of white pine have given way to hardwoods, diverse in age and species. Despite the return of forests, the forest we see today is not identical to pre-colonial forests. There are challenges facing New England’s forests.

The forests of Minute Man face several challenges because of prior colonial clear cutting and urban influence.

One of the most glaring issues facing the forests of Southern New England, and Minute Man in particular, is the presence of invasive species and their effect on the landscape. Fast-spreading shrubs like glossy buckthorn make it difficult for native plant species to establish themselves. Unfortunately, the disturbed nature of the landscape makes it easier for invasives to take hold and spread.

Despite the threats posed to the forests of Minute Man, the park landscape still serves as a refuge from the expanding development of the Boston Metro area. Within the park’s boundaries, visitors can observe and enjoy over 751 species of plant, animal and fungus (2018 MIMA Bio Blitz). According to observations between 1992 and 2008, there are at least five endangered plant species in the park, and 12 species in the immediate vicinity of the park.