The breathtaking beauty of Alaska inspires visitors and residents alike to reach for their cameras and document the view before them. In that euphoric moment, it feels like photography was specifically invented to capture and preserve our memories of extraordinary places like Alaska’s national parks. The early explorers, scientists, and visitors who ventured to Alaska around the turn of the 20th century felt the same urge that we do to document and share their experiences. Beginning in the late 1800s, cameras rapidly became standard equipment for expeditions to Alaska. Many of the early explorers and scientists recognized the utility of photography for documenting natural and cultural resources and as a result, thousands of high-quality images were produced during this time. Pioneer photographers captured Alaska on film at the turn of the century. A few of these early photographers recognized the value of systematically revisiting sites and using repeat photography to create long-term records of natural resource change.

Geophysicist Harry Fielding Reid (pictured in Figure 1) was one of the early proponents of repeat photography. Reid made expeditions to Glacier Bay in 1890 and 1892 and, during these visits, he quickly recognized the effectiveness of repeat photography for monitoring landscape changes in Alaska. In 1896 Reid wrote:

All photographs of the end of a glacier are useful, especially those taken from a station easily accessible and easily described; photographs taken from the same station at a future date will show what changes have taken place in the interval. (Reid 1896: 867)

In the 125 years that have elapsed since Reid wrote those words, scores of researchers and photographers have used repeat photography techniques to leverage the treasure trove of historical photos to document and study the past century of environmental changes in Glacier Bay and many other areas currently managed by the National Park Service (NPS).

It is important to understand how the natural resources of Alaska’s national parks have changed during the past century and how the ecosystems and landscapes of the parks are responding to drivers such as climate change, human visitation, and development. This information and data are critical for effective park management and public safety. It is well established that repeat photography is an effective method for qualitatively and quantitatively documenting and evaluating complex changes in natural and cultural resources over time (Jorgenson et al. 2006, Karpilo and Venator 2015, Molnia 2010, Webb et al. 2010). Additionally, numerous studies have demonstrated the value and efficiency of repeat photography as a tool for studying landscape-scale changes and communicating the complex effects of climate change in national parks to diverse audiences including park visitors, resource managers, and scientists (Adema et al. 2007, Fagre and McKeon 2010, Karpilo et al. 2006, Molnia et al. 2004, Molnia et al. 2007, Roland and Stehn 2013).

This step consists of visiting various archives and collecting historical images depicting the targeted subjects (glaciers, vegetation, or other resources) in the area of interest. To make relocation possible, the photos must include identifiable features, such as mountain peaks, rock outcrops, or other static landmarks, that are unlikely to significantly change in the time since the photo was made. It is also beneficial to gather additional material such as photographer field notes, journals, personal letters, maps, and publications that may assist in finding photo locations and provide context for the images. I have collected thousands of historical images made in Alaska’s national parks from the following sources: Alaska NPS park archives, Library and Archives Canada, Library of Congress, National Archives, National Snow and Ice Data Center, Royal BC Museum, University of Alaska Fairbanks, University of California Riverside, University of Washington, U.S. Geological Survey, Yukon Archives, and various private photo collections.

The second phase is evaluating and prioritizing potential photos based on criteria relevant to the project goals. Examples of prioritization criteria are: quality of original photograph, depiction of natural resources (or other subject of interest), seasonality of original photograph (most projects have a preference for snow-free summer images), photo location access and safety, and repeatability (Karpilo and Venator 2015). Once the high-priority photos are selected, the locations of the photo sites should be identified and mapped. Park staff, shuttle bus drivers, pilots, local residents, or anyone with intimate knowledge of the field area should be consulted to help pinpoint photo locations and identify landmarks visible in the images. Using Google Earth, GIS data, and topographic maps, it is often possible to digitally simulate the view of the historical photo or use triangulation to determine a general location of the photo site. Other project planning tasks include printing field copies of photos and planning fieldwork transportation and logistics.

The third phase involves visiting high-priority historical photo locations and making modern images. One technique that has served me well in finding photo locations in the field is the “think like a photographer technique,” in which I look at the local area and ask myself: “If I were a photographer, where would I want to go to make a photo?” This simple technique often leads to prominent overlooks, hills, or other obvious photo-taking locations. Once the general photo location is found, the camera position is fine-tuned by moving around and comparing the apparent position of key temporally stable foreground and background elements, such as identifiable rocks, ridges, and peaks with the position of those same features in the printed field photo (Figures 2 and 3). After making a modern repeat of the photo, a GPS is used to record the latitude, longitude, and elevation of the photo stations (Figure 4). Additionally, the camera height and bearing for each photo is recorded. Reference photos of each photo site should be made to aid in finding the site in the future. To extend the utility of the photo station, a high-resolution, 360-degree panoramic image should be made at each photo location. For more detailed descriptions of repeat photo-monitoring methods, see Hall 2002, Jorgenson et al. 2006, Karpilo 2009, Karpilo and Venator 2015, and Webb et al. 2010.

The photo pairs are then examined and the notable changes summarized. Each person who views a photo pair, views it through the lens of their own experience and expertise. Therefore, it is often beneficial to consult with specialists from different fields. Several individuals can view the same photo pair and they may all notice different details and nuances that otherwise would have gone undetected. Depending on the objectives of the project, the pairs can be analyzed to identify variations in vegetation density and distribution, ecosystem composition and connectivity, fluvial morphology, glacier dynamics, geomorphic change, anthropogenic impacts, and other changes. Contingent on the quality of the images and precision of the repeat, both qualitative and quantitative analyses are possible. Brodie and others (2019) provides a good example of the use of photo pairs to analyze land-cover change in Denali National Park. See Webb and others (2010) for other examples of analysis techniques.

The photo pairs or series that are produced are useful for illustrating and analyzing changes over time in a wide range of physical or cultural resources. The resulting data can assist in identifying specific features or processes that may require more intensive monitoring and research and can serve as a valuable tool for education, outreach, and resource management. The high-resolution photo pairs and well-documented photo stations serve as a baseline and can be easily revisited and rephotographed to detect and monitor future changes in park resources.

The significant communication and educational value of repeat photo pairs is apparent in how quickly viewers comprehend the information being presented and are often drawn in to learn more about subjects that are complex or difficult to conceptualize. The adage that “a picture is worth a thousand words” certainly applies and one could argue that a photo pair or series has a multiplying effect making them worth much more. Repeat photography satisfies an innate human yearning for time travel. On a basic level, photo pairs serve as virtual time machines that afford researchers and viewers that desired ability to transcend time and see a snapshot of how things used to be.

Panoramic view of the terminus of Reid Glacier in Glacier Bay National Park and Preserve.

View south from a small hill north of the park road near Polychrome Pass, Denali National Park and Preserve.

Notable changes:  There has been significant melting of the Polychrome Glaciers, drying of the large pond in the foreground and development of several new ponds (related to permafrost melting), shift in vegetation from primarily low tundra to brush, and construction of the park road (a glimpse of a curve of the dirt road is visible above the left-most pond).

Notable changes:  There has been significant retreat and thinning of the East Fork Toklat Glacier as well as melting of several cirque glaciers in tributary valleys. The East Fork Toklat River has migrated from the east bank of the outwash plain to the west bank. 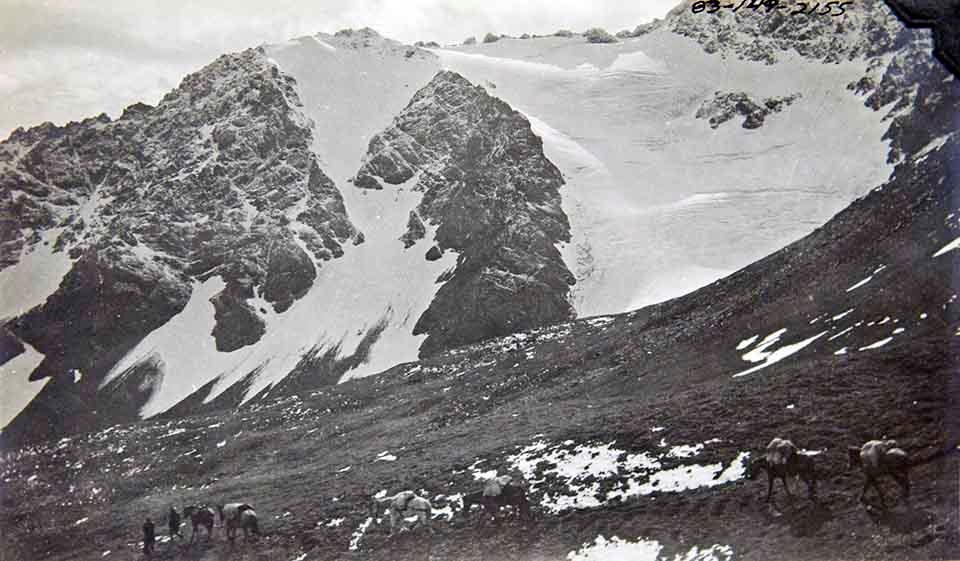 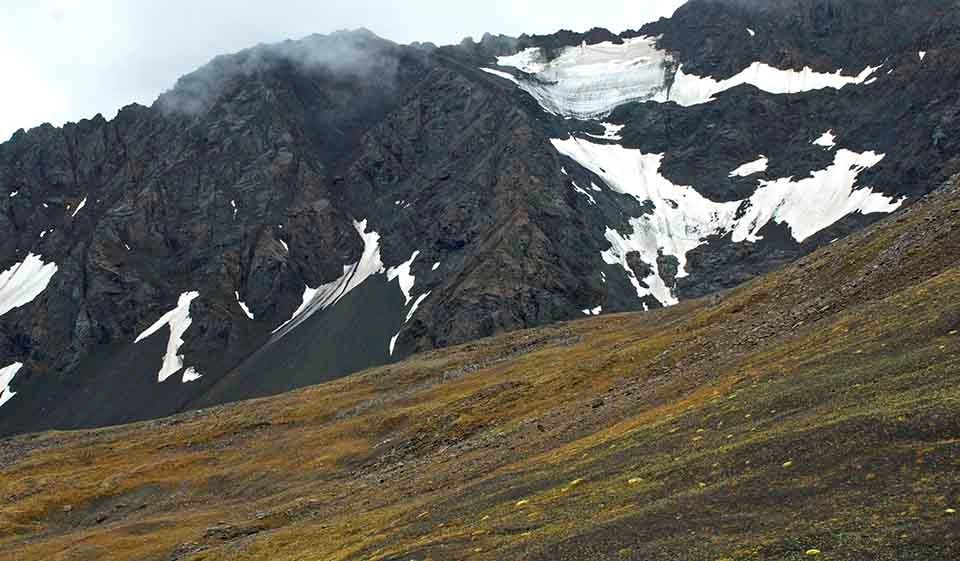 Notable changes:  There has been significant melting of the cirque glaciers at the head of Windy Creek.

View north of Nutuvukti Lake from small peak between the lake and Kobuk River in Gates of the Arctic National Park and Preserve. 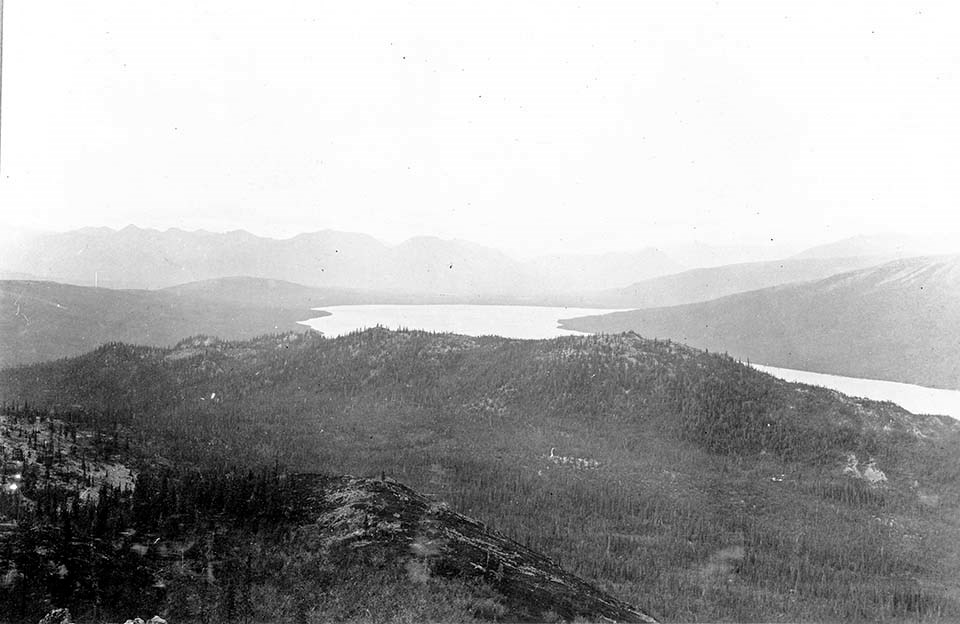 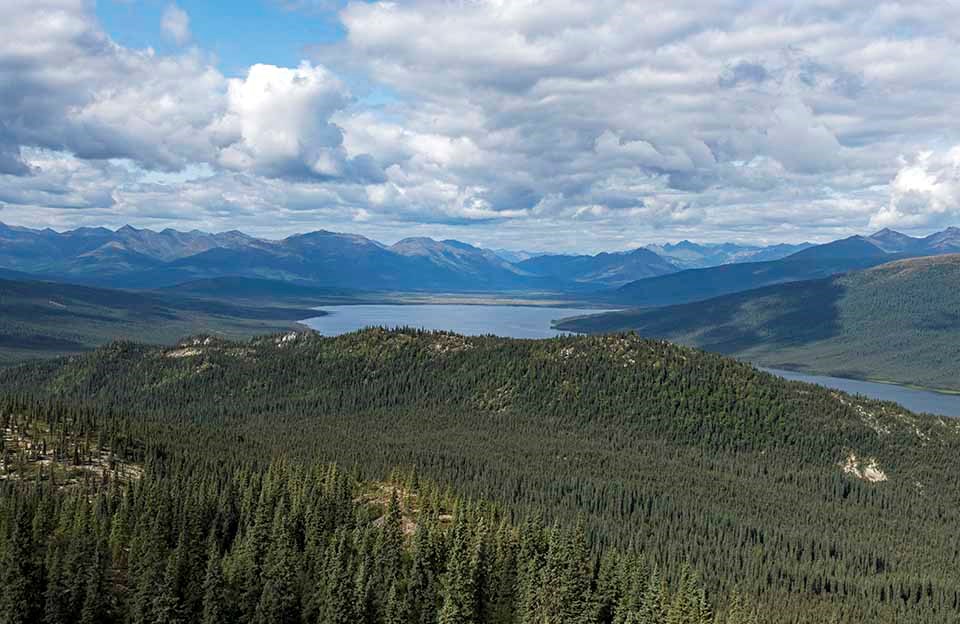 Notable changes:  There has been an Increase in density and size of white spruce (Picea glauca) on the slope in the foreground and on the midground ridge. 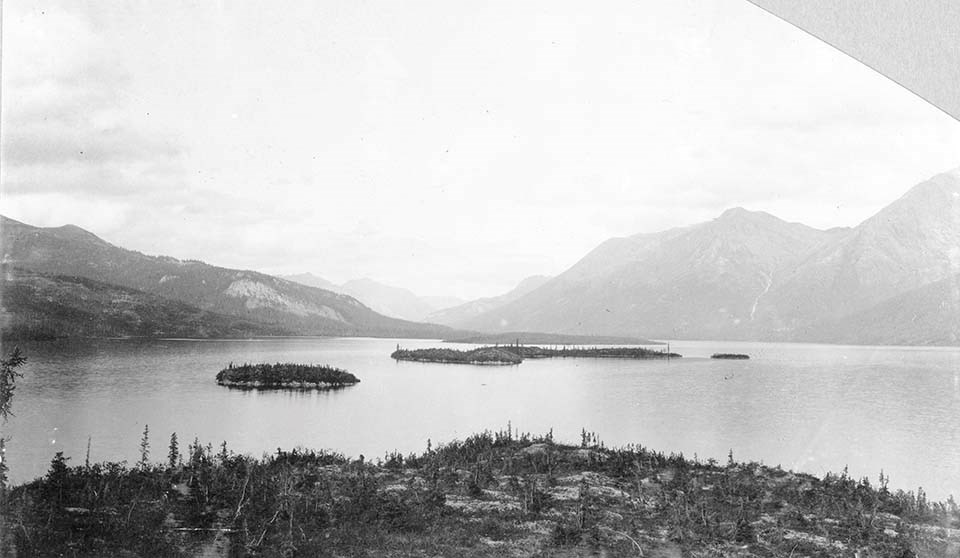 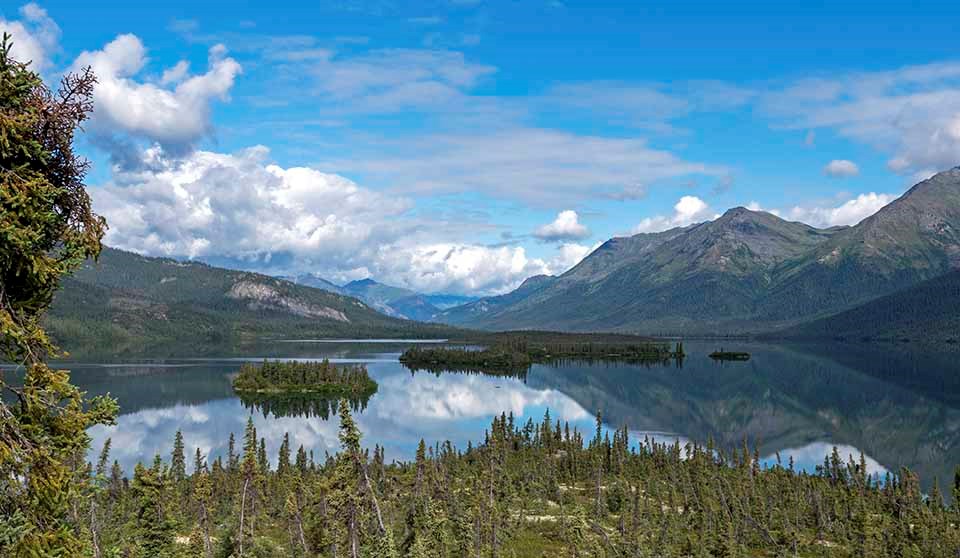 Notable changes:  Photo pair shows variations in density, distribution, and size of vegetation such as white spruce (Picea glauca), black spruce (Picea mariana), balsam poplar (Populus balsamifera), and willows (Salix spp.). Specifically, the trees have increased in size and number and there is a general increase in shrub density. Shrubs have filled many of the previously open areas and thickened along the lakeshore and in stream channels.

View north of the waterfront in Skagway. 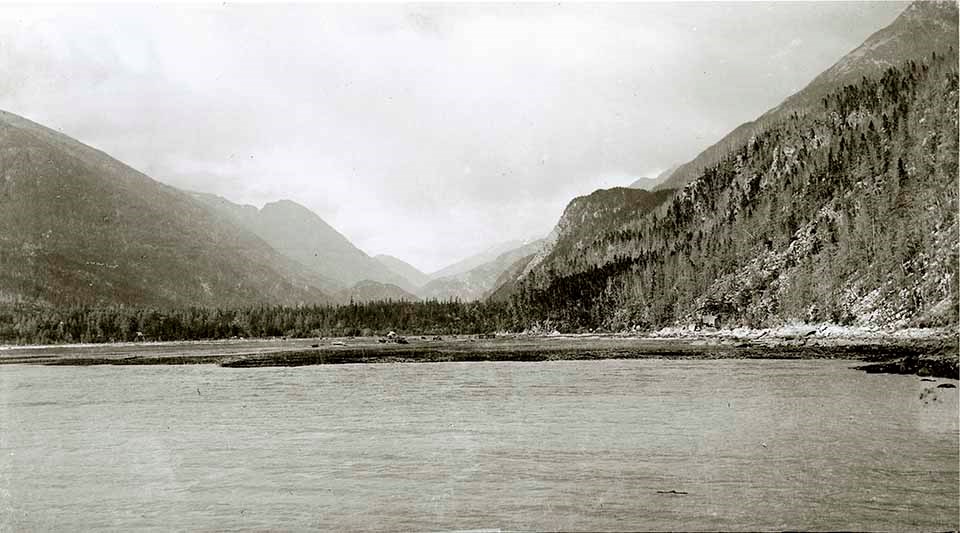 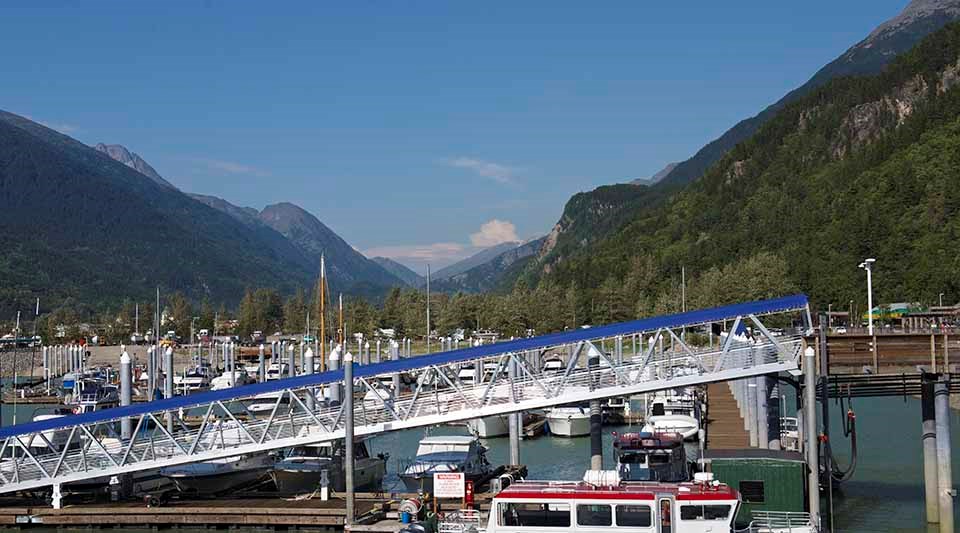 Notable changes:  Vegetation on the slopes around the town has thickened and the shoreline and tidal area have been altered by dredge and fill operations. Additional changes include residential and commercial development and infrastructure improvements such as construction of the Skagway Small Boat Harbor.

View to the south of the East Fork Skagway River and train on the White Pass and Yukon Route Railway rounding the curve at Rocky Point, Klondike Gold Rush National Historical Park. 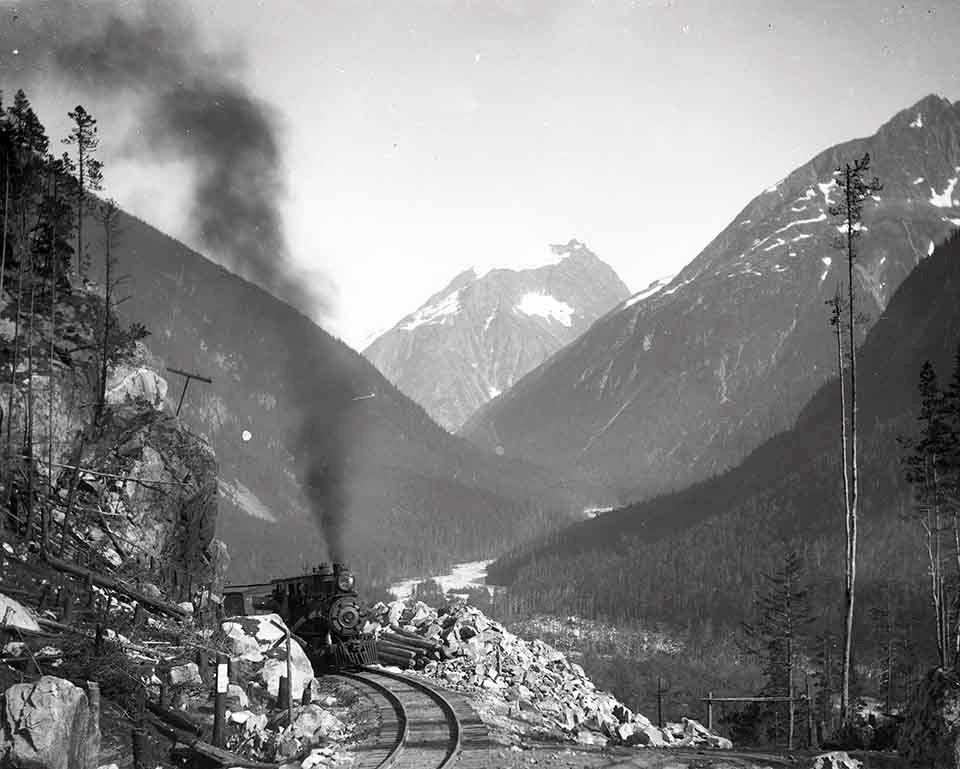 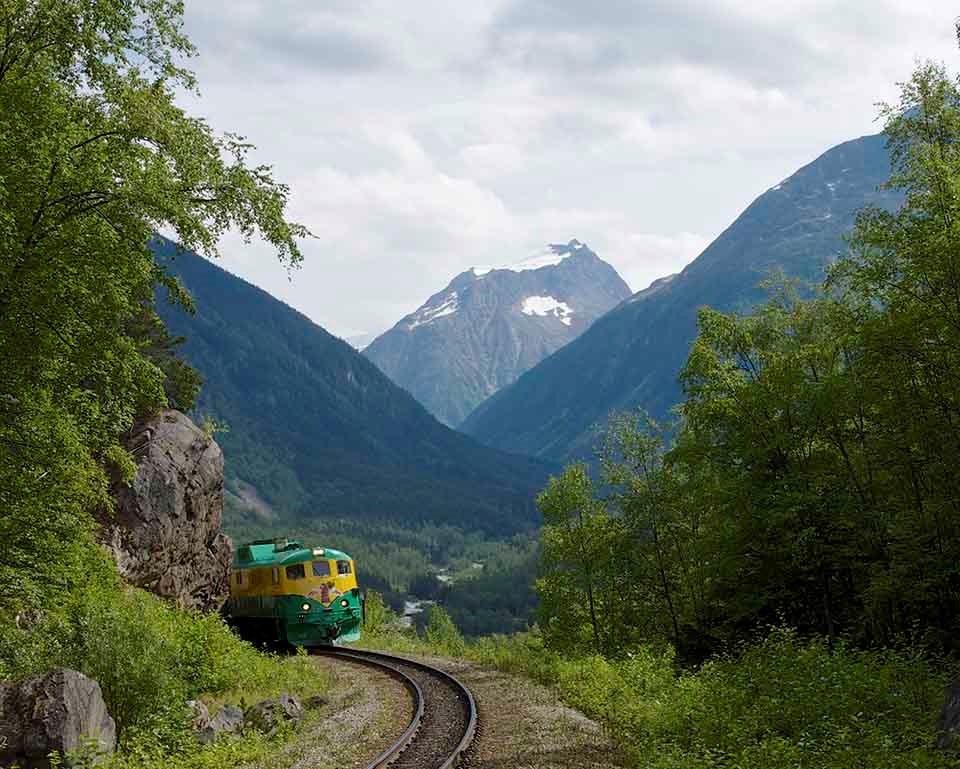 Notable changes:  Rock has been blasted and removed along the railroad, there is an increase in the density of vegetation along the East Fork Skagway River, regrowth of vegetation in the area disturbed by the railroad construction, a shift from predominantly spruce forest to a deciduous species dominated environment, and slight shrinking and thinning of the ice on the peak in the background.

Panorama of Chilkoot Pass from north of Boundary Monument 121 with view of Crater Lake and glaciers on both sides of the United States-Canada boundary. The Chilkoot Trail and structures on the pass are also visible.

Notable changes:  Glaciers on both sides of Chilkoot Pass have significantly retreated, there is a slight change in lake level, and deterioration of historic structures at the pass.

Cite this article as: