The Stronghold District of Badlands National Park offers more than scenic badlands with spectacular views. Rich in history, this 133,300 acre area is managed by the National Park Service in conjunction with the Oglala Lakota Tribe. Deep draws, high tables, and rolling prairie hold the stories of the earliest plains hunters, the paleo-Indians, as well as the present day Lakota Nation. Homesteaders and fossil hunters have also made their mark on the land. There is a more recent role this remote, sparsely populated area has played in U.S. history: World War II and the Badlands gunnery range.

As part of the war efforts, the U.S. Air Force (USAF) took possession of 341,726 acres of land on the Pine Ridge Reservation, home of the Oglala Lakota people, for a gunnery range. Included in this range was 337 acres from then Badlands National Monument. This land was used extensively in the early 1940s as air-to-air and air-to-ground gunnery ranges. Precision and demolition bombing exercises were also quite common. After the war, the South Dakota National Guard used portions of the bombing range as an artillery range. In 1968, the USAF declared most of the range excess property.

Firing took place within most of the present day South Unit of Badlands National Park. Land was bought or leased at sub-prime costs from individual landowners and the Tribe in order to clear the area of human occupation. Old car bodies and 55 gallon drums painted bright yellow were used as targets. Bulls-eyes 250 feet across were plowed into the ground and used as targets by bombardier bombing flights. Small automatic aircraft called “drones” and 60 foot by 8 foot screens dragged behind planes served as mobile targets. Hundreds of fossil resources were destroyed in bombing efforts. Gleaming bright white from the air, the large fossil remains of the elephant-sized titanothere were commonly targeted by bombers. Today, the ground is littered with discarded bullet shells and unexploded ordinance.

The justification for selecting this land for bombing practice was that the land was seen as useless and empty. This, however, was not true. 125 families were relocated from their farms and ranches in the 1940s. Those that remained nearby recall times when they dove under tractors while out cutting hay to avoid shells dropped by planes miles outside of the boundary. In the town of Interior, both a church and the building housing the current post office received six inch shells through the roof. Pilots in practice, operating out of Ellsworth Air Force Base near Rapid City, found it a challenge to determine the exact boundaries of the range. Fortunately, there were no civilian casualties although at least a dozen members of flight crews lost their lives in plane crashes.

Unexploded Ordinance (UXO) is explosive or chemical munitions that were prepared for action but did not activate. Most UXO is from past activities associated with training or weapons testing. It comes in all shapes and sizes – from small bullets to large bombs.

Just as it was difficult for pilots to determine the gunnery range from the air, it is challenging to find your way when exploring the Stronghold District. There are few roads. The natural conditions of rain and snow add to the complexity. Throughout the Stronghold District are spent 50 caliber machine gun shells and 20 mm cannon shells. Larger explosive shells are occasionally found eroding out of the Badlands buttes. If you find any UXO, get a safe distance from the object and contact the White River Visitor Center at 605-455-2878.

Stand on the edge of a canyon carved through the Badlands and imagine a time when the faint hum of planes grew into a steady buzz. The White River Badlands, avoided by the soldiers of the nineteenth century, becomes a training ground for the airmen of the twentieth. The wind gives way to an explosion. Or not. Those UXO wait for the opportunity to do what they were built to do: detonate. Keep yourself and your loved ones safe by leaving these tangible reminders of a world of war in place and sharing your find with those who can continue to keep this small part of the world safe. 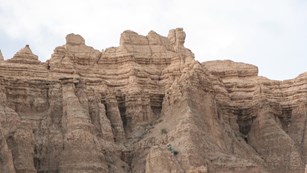 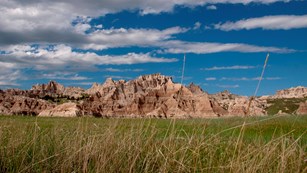 Everything you need to know about camping in the Badlands. 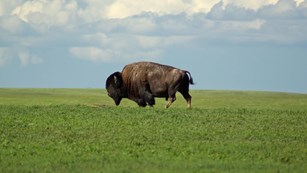 Learn about the animals living in Badlands National Park.

Series: History & Culture in the Badlands