Boston served as a destination for many people escaping slavery on the Underground Railroad. Freedom seekers arriving in the city found that Boston's tightly knit free Black community provided support and a welcome sanctuary as they began their new lives. This article highlights the journey of a freedom seeker, Shadrach Minkins, who escaped to Boston. To explore additional stories, visit Boston: An Underground Railroad Hub.

Born enslaved in Norfolk, Virginia, Shadrach Minkins escaped to Boston in the spring of 1850. Nine months later, slave catchers, empowered by the Fugitive Slave Law, arrested Minkins with plans to return him to his owner in Virginia. While held at the courthouse, Black Bostonians staged a daring rescue and successfully escorted Minkins out of the city to safety. Follow his inspiring journey from slavery to freedom in Canada in this interactive story-map.

Explore the story map below to learn about Shadrach Minkins' journey to freedom. Click "Get Started" to enter the map. To read more about each point, click "More" or scroll down to view the map, historical images, and accompanying text. To navigate between the points, please use the "Next Stop" button at the bottom of the slides or the arrows on either side of the main image. To view a larger version of the main image depicted below the map, click on the image.

Map goes here. Enabling JavaScript will give you the best experience. 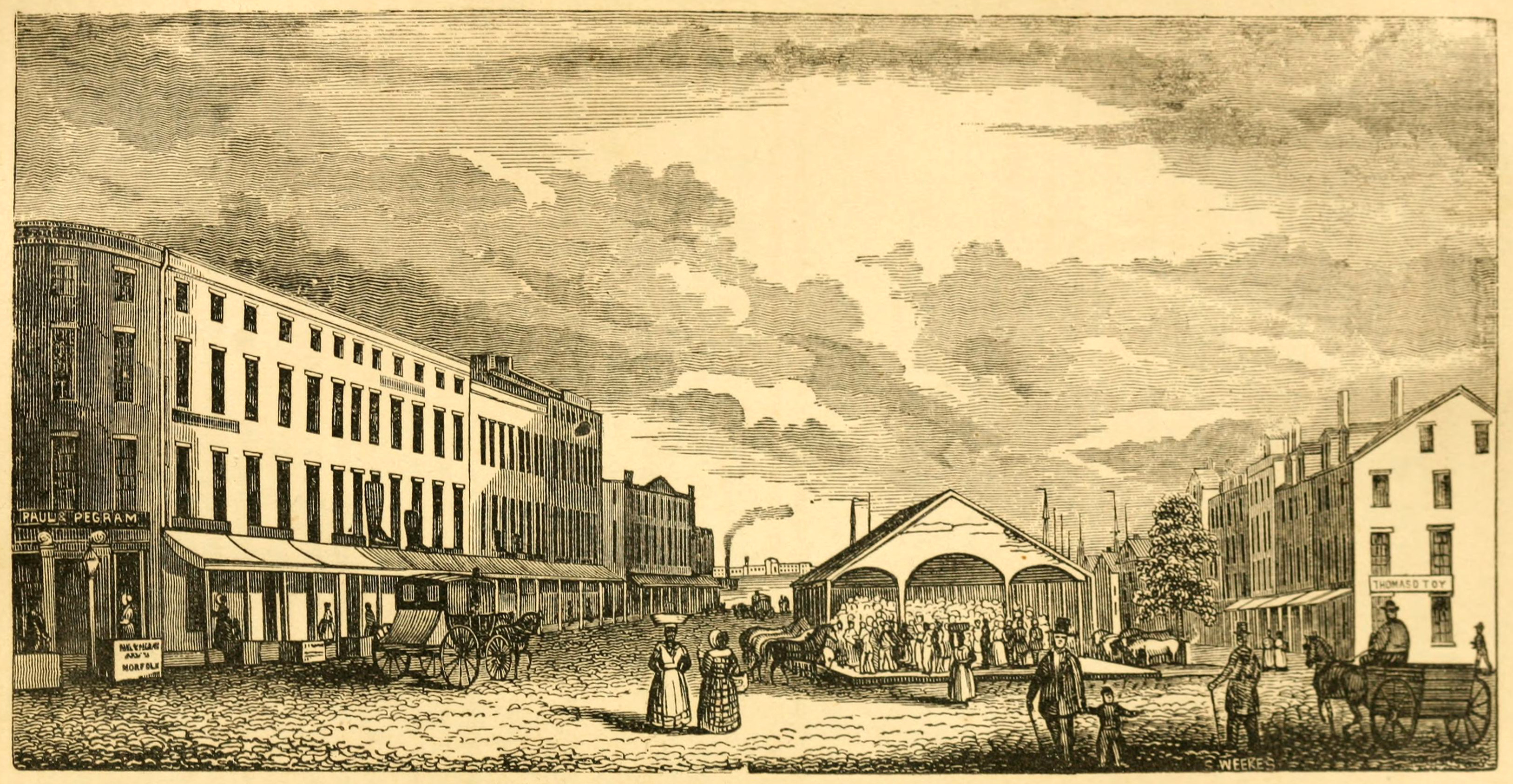 Born enslaved, likely in 1814, Shadrach Minkins lived and worked in Norfolk, Virginia until his escape in 1849. Thomas Glenn, the slaveholder who owned Minkins and his parents, ran the Eagle Tavern and Hotel near Market Square. Minkins worked at the Eagle Tavern until Glenn hired him out to Martha Hutchings to work at her store and warehouse, also near Market Square. 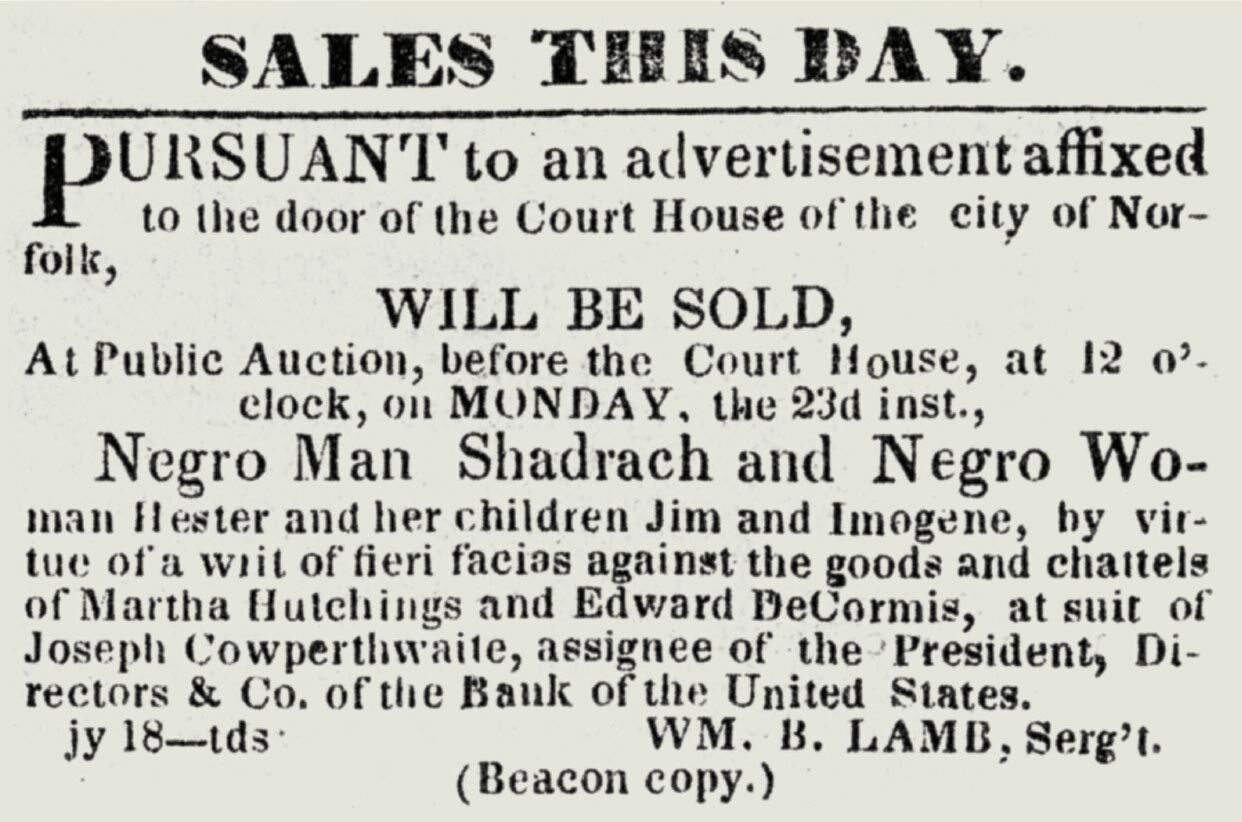 This newspaper clip advertises the upcoming public auction during which Shadrach Minkins will be sold. (Credit: Long Road to Justice)

Hutchings soon purchased Minkins. However, when her business failed, she auctioned him and several other enslaved people to help settle her debts. John A. Higgins bought Minkins and then later sold him to his father-in-law, John DeBree.[1] 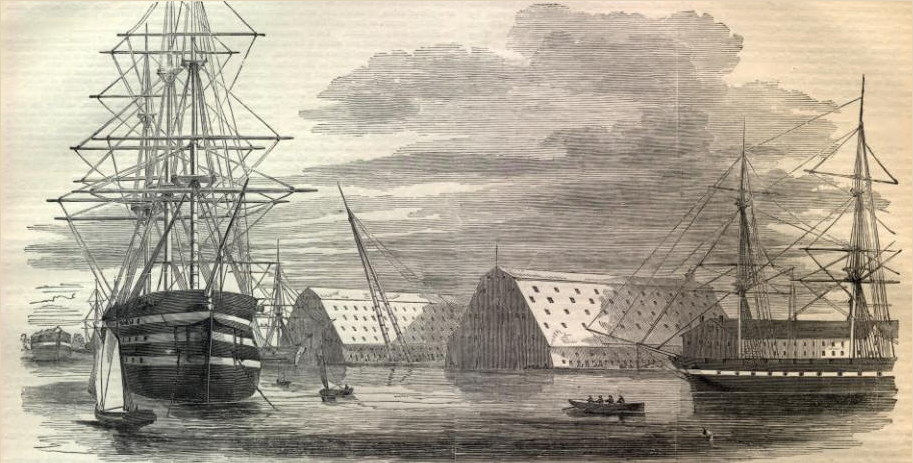 In early May 1850, Minkins escaped from Norfolk, most likely by sea. Many northern bound ships departed from Norfolk to port cities such as Philadelphia, New York, and Boston. Many freedom seekers, particularly from places along the coast, used ships as their primary means of escape whether hiding as stowaways or with the help of sympathetic, or compensated, captains or crew.[2] 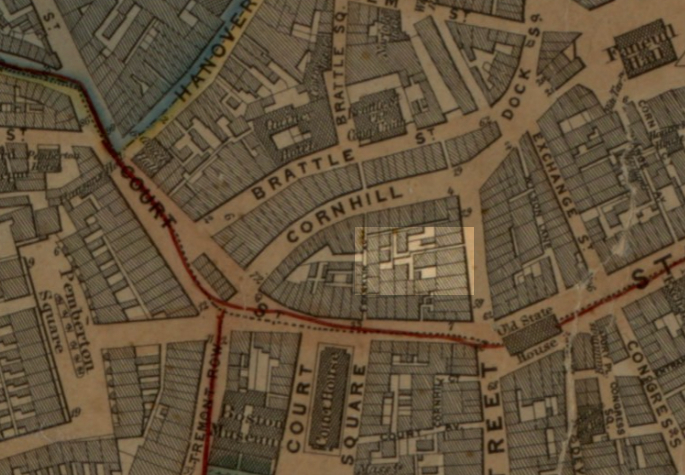 Shadrach Minkins worked as a waiter at Cornhill Coffee House and Tavern, believed to have been located in the highlighted area. (Credit: Digital Commonwealth)

Though we do not know Minkins’ exact route to Massachusetts, he set foot in Boston in May 1850. He soon found steady work as a waiter in the Cornhill Coffee House and Tavern, in the commercial heart of the city. He may have lived there for a time as well.

Shadrach Minkins worked as a waiter at Cornhill Coffee House and Tavern, believed to have been located in the highlighted area. (Credit: Boston Public Library)

Nine months later, John Caphart, a constable from Norfolk, acting on behalf of Shadrach’s owner, John DeBree, enlisted the help of the U.S. Commissioner and federal marshals in Boston to execute the Fugitive Slave Law, arrest Shadrach, and transport him back to Virginia.

On the morning of February 15, 1851, Assistant Deputy Marshall Patrick Riley and other agents arrested Shadrach at the Cornhill Coffee House, minutes after he served them coffee.

With his arrest, Minkins became the first fugitive slave to be seized in New England under the Fugitive Slave Law of 1850. [3] 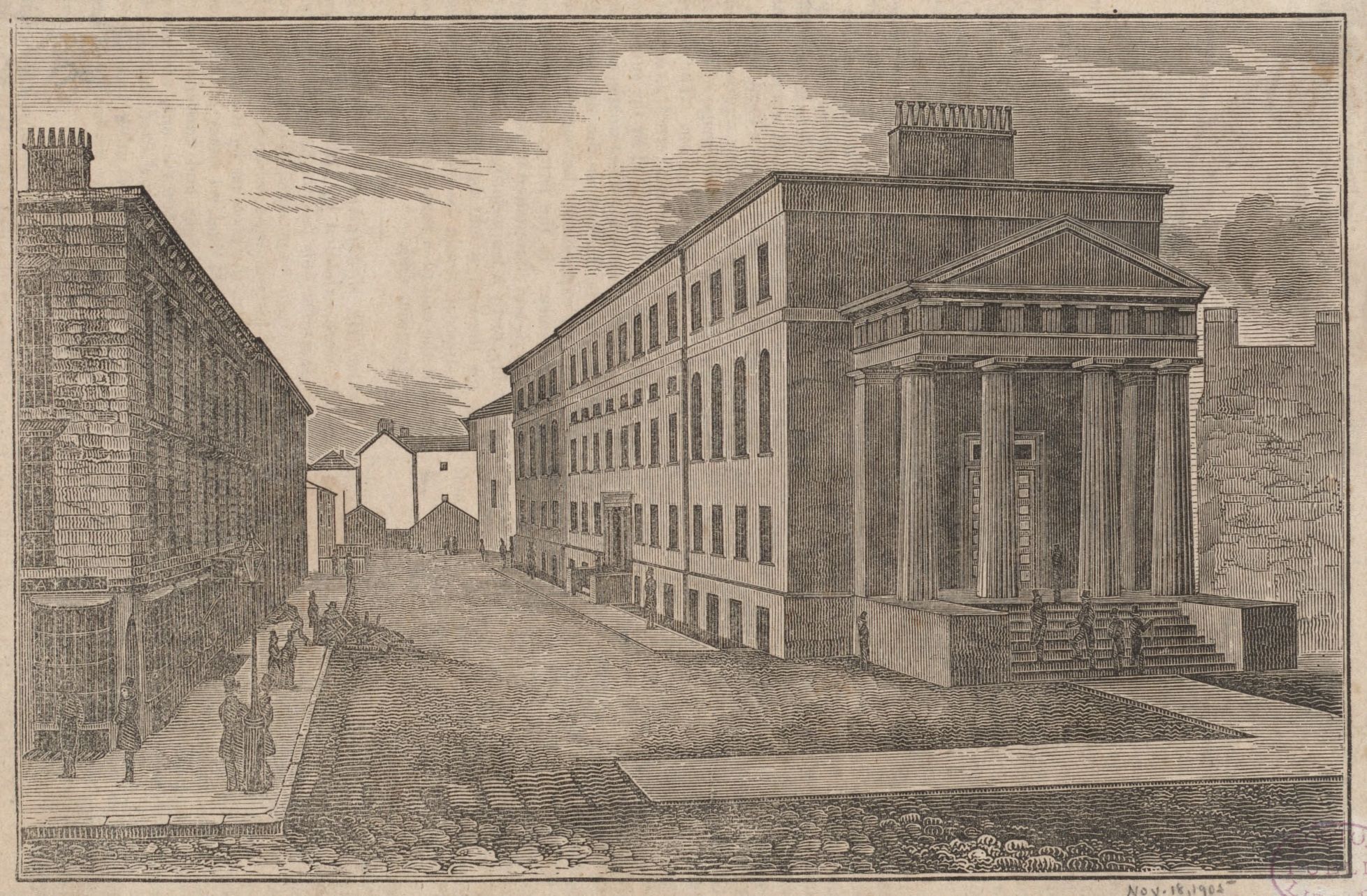 Following Minkins’ arrest, Riley and his deputies brought him directly to the courthouse nearby to await his hearing. Crowds soon gathered in and around the courthouse demanding answers.

As tensions mounted, a group of Black men, led by Lewis Hayden, rushed the courtroom, overwhelmed the guards, and seized Shadrach Minkins. The rescue party hustled Minkins out of the courthouse and into the streets heading for the Black community on Beacon Hill.

Shocked and defeated, the authorities did not pursue Minkins and his rescuers.

Dr. Henry Bowditch, a prominent member of the Boston Vigilance Committee, wrote, “Today will ever be a holy day in my calendar, for another slave has been rescued from the fangs of the slave hunter.” Reverend Theodore Parker considered this rescue to be “the most noble deed done in Boston since the destruction of the tea in 1773.” [4] 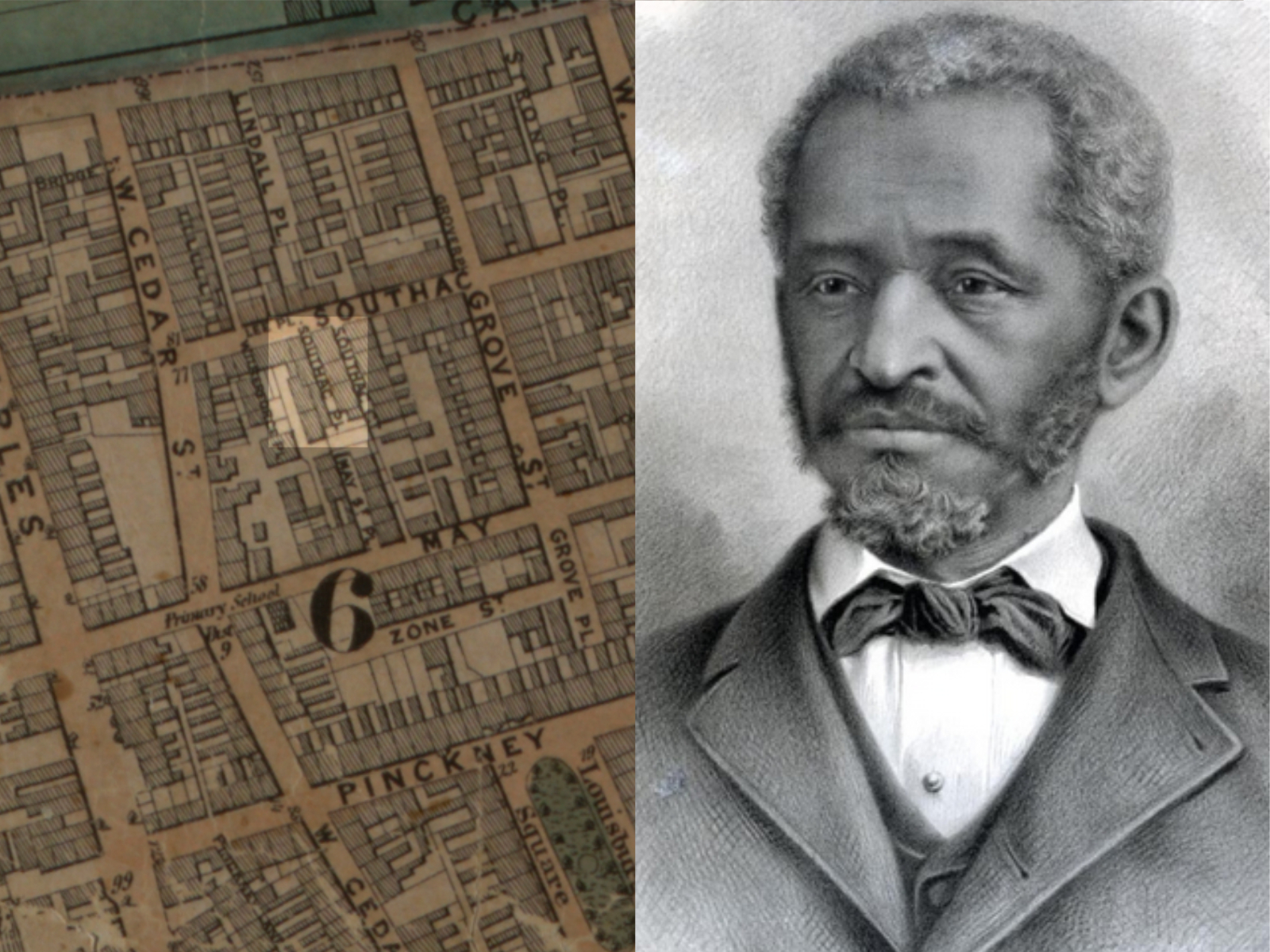 According to Lewis Hayden, when the rescue party made it to Beacon Hill, he and Robert Morris, a Black attorney, "'escorted Shadrach away from the crowd' and 'safely lodged him in the attic of a widow, Mrs. Elizabeth Riley, one of our race, whose fidelity and humanity we all fully confided in.'" Riley lived on Southac Place, not far from Hayden’s own home and safe house on Southac Street.[5] 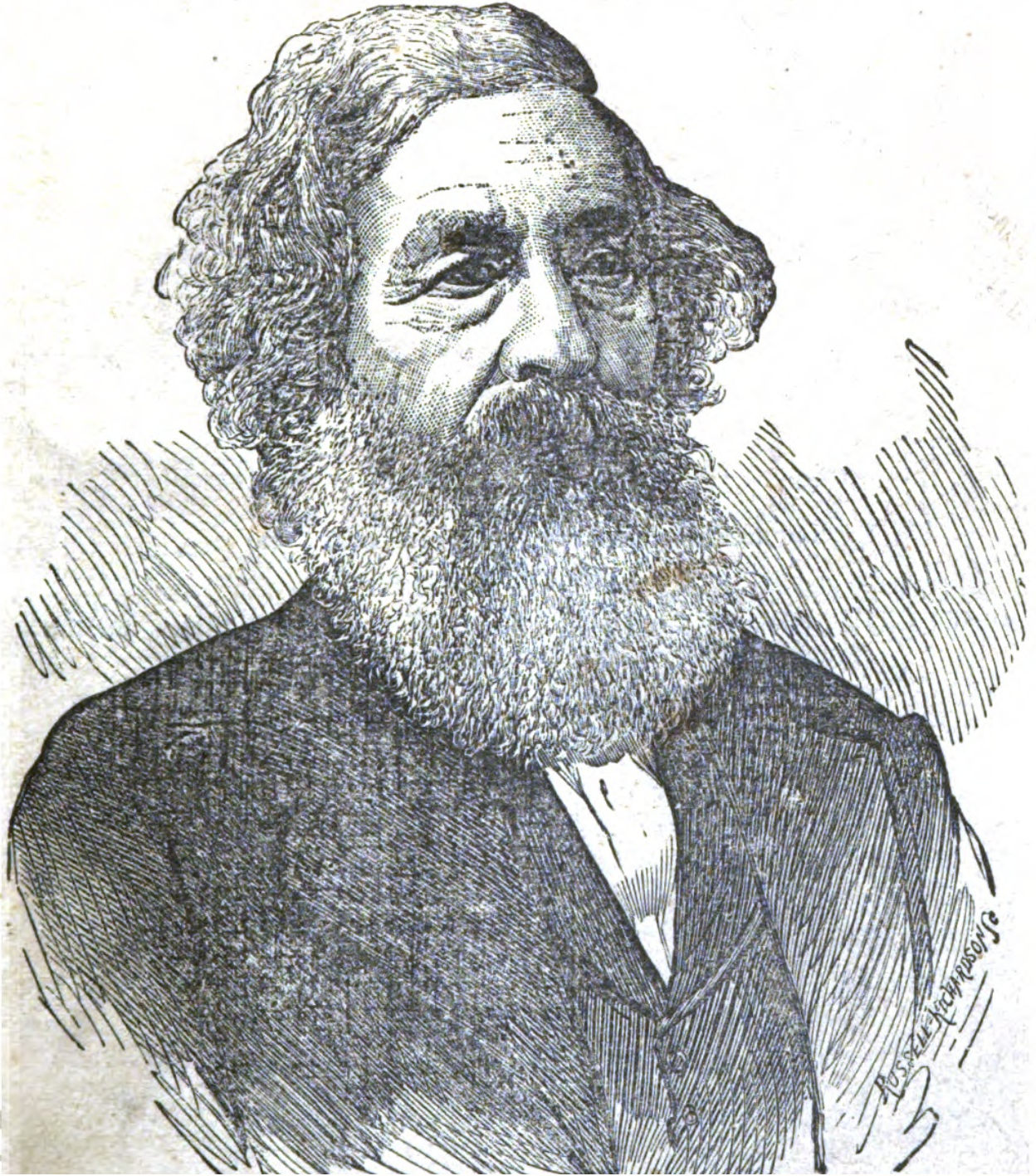 According to city directories from the 1850s, Lovejoy lived on the corner of Walnut and Charles streets. Today, this corner may be at the intersection of Putnam and Waverley Streets in Cambridge. (Credit: Joseph C. Lovejoy, c.1869)

Based on his account, Lewis Hayden soon took Minkins from Mrs. Riley’s house to nearby Watertown by horse and chaise to get him out of the city. After spending the afternoon there, they headed to the Cambridge home of Reverend Joseph C. Lovejoy, brother of the martyred abolitionist Elijah Lovejoy. [6] 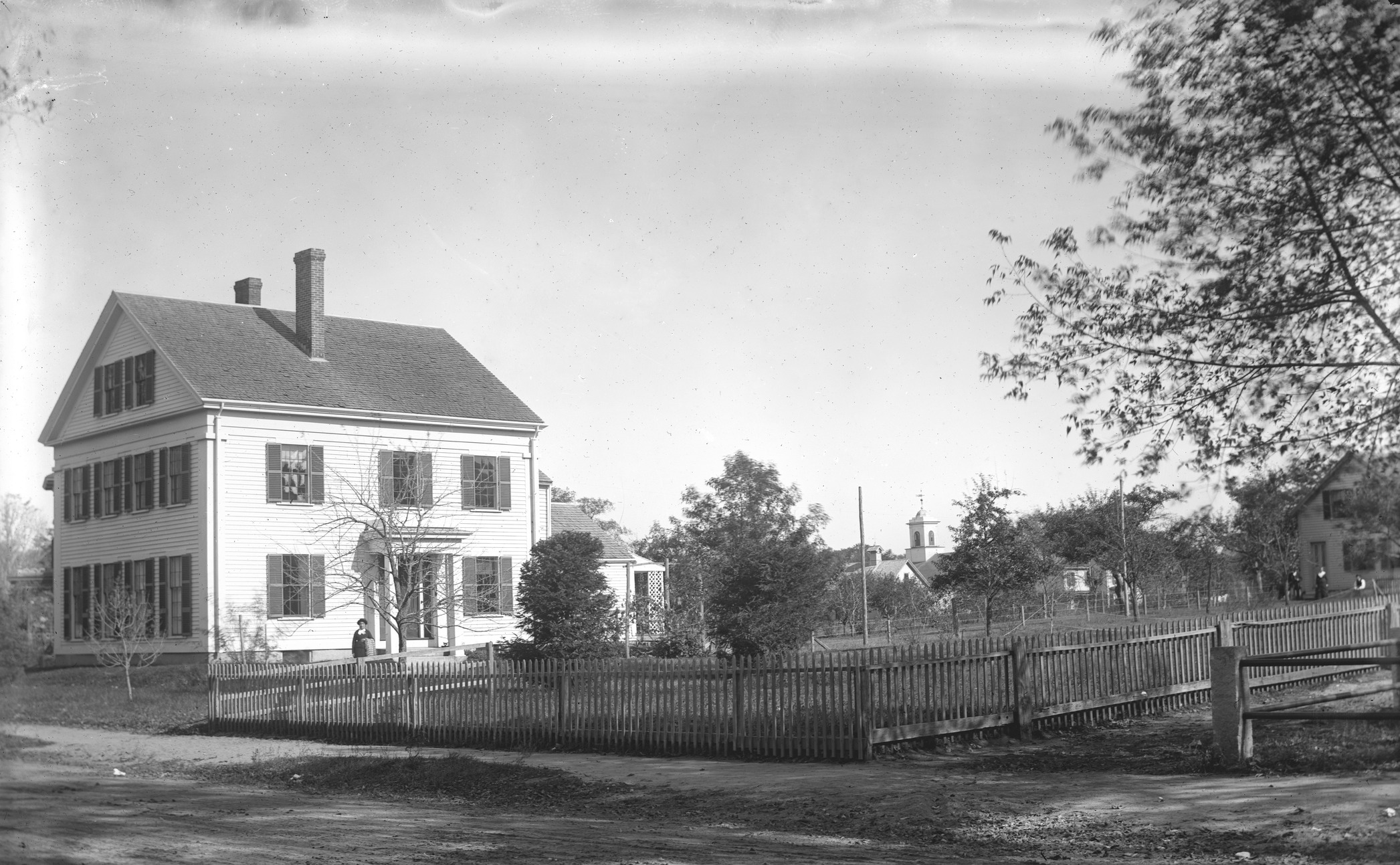 On the night of February 16, Hayden and Smith brought Minkins to the Bigelows' house in Concord to hide. (Credit: Concord Library)

Later that night, Hayden and John J. Smith, another Black leader from Boston, drove Minkins to Concord where they left him in the care of Ann and Francis Bigelow. Mrs. Bigelow later recalled that Hayden, Smith, and Shadrach “arrived at Concord at three o’clock Sunday morning…Mr. Bigelow, hearing the carriage, opened his door, and let in the poor fugitive…The blinds of the house were at once shut, and the windows darkened, to evade the notice of any passers-by…” She cooked Minkins breakfast but described him as “so fatigued with loss of sleep, and anxiety, that he could hardly keep awake while eating.” [7] 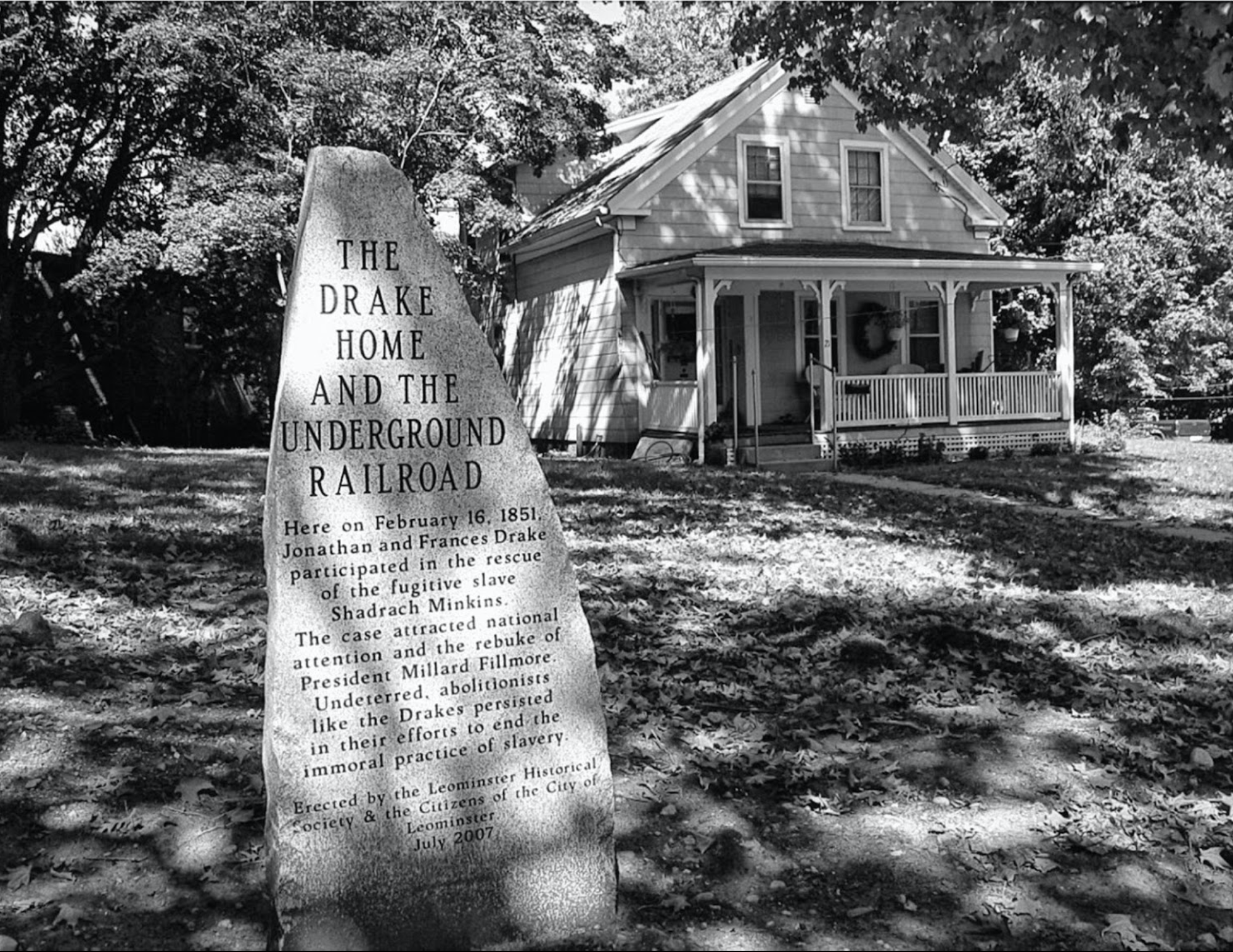 According to Ann Bigelow, after Shadrach Minkins’ brief respite in Concord, her husband took him by horse and carriage to the home of Frances and Jonathan Drake in Leominster. A staunch abolitionist, Mrs. Drake later proudly proclaimed that she “had the honor of sheltering Shadrach when his pursuers were searching for him.” Minkins likely spent the remainder of the day with the Drakes before heading further north.[8] 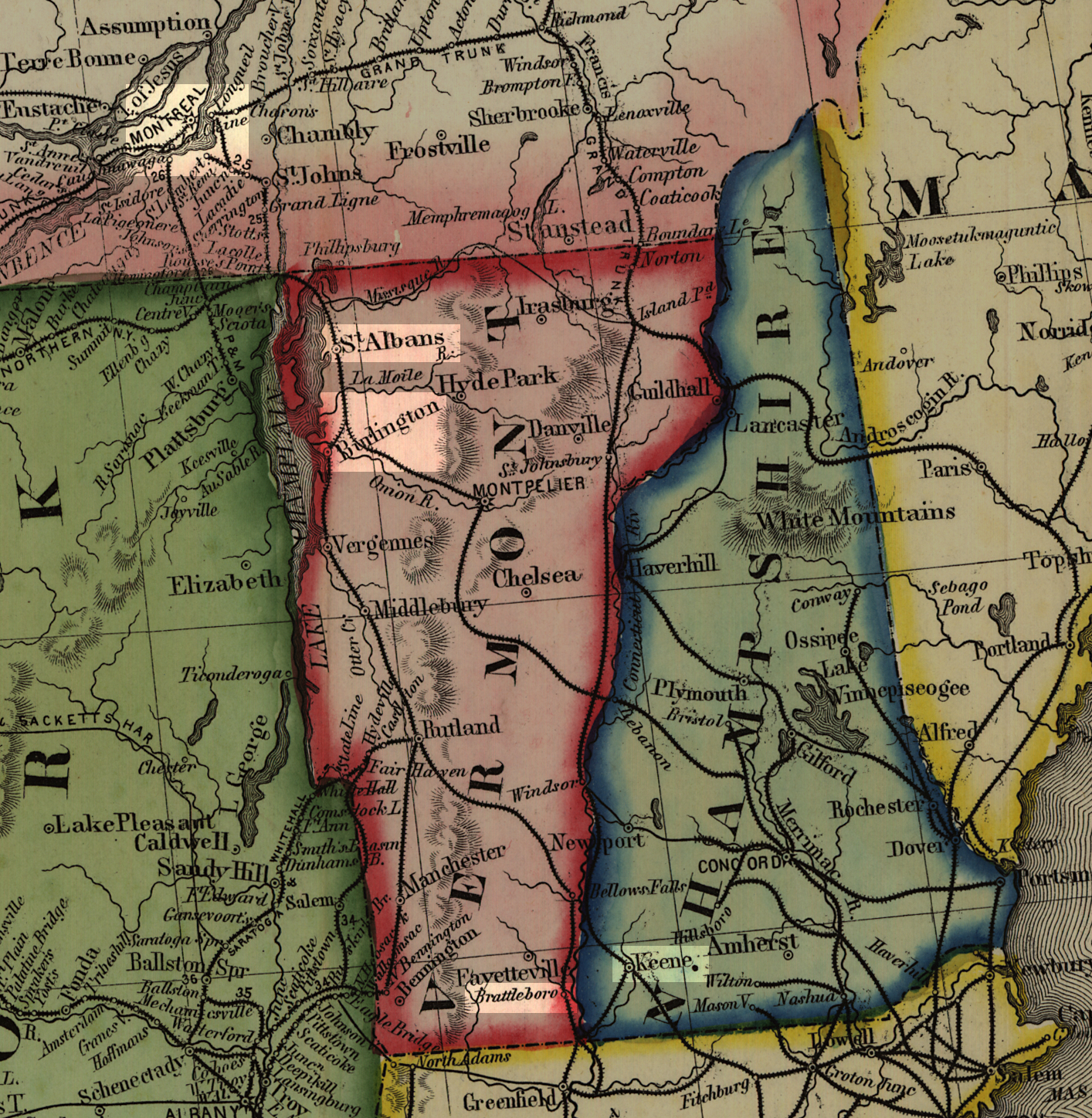 This map, with railroad routes and highlighted cities, demonstrate the possible paths Minkins may have traveled north to Canada. (Credit: Library of Congress)

Tracing Minkins’ journey from Leominster becomes more problematic as there are no verifiable accounts of the route he took. His biographer, Gary Collision, suggests that Shadrach Minkins may have crossed into New Hampshire on February 17th or 18th. He likely stuck close to the railroad heading north through Keene, New Hampshire or crossed overland west to Brattleboro, Vermont then followed the railway line north from there. Given the speed in which he reached Canada, it is likely that Minkins traveled both by foot and train as he made his way through either Burlington or St. Albans, in the northwest corner of Vermont, by midweek. In all likelihood, he crossed into Canada heading towards La Praire by Thursday or early Friday morning, then crossed the frozen Saint Lawrence River into Montreal.[9] 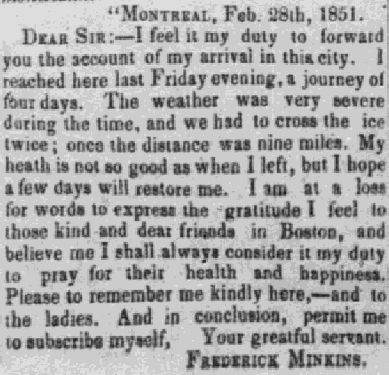 Within a week of arriving in Montreal, Shadrach Minkins sent the following letter to an unknown recipient to let him know of his whereabouts. He signed it “Frederick Minkins,” the name he adopted in Boston to conceal his identity when he first ran away.

I feel it my duty to forward you the account of my arrival in this city. I reached here last Friday evening, a journey of four days. The weather was very severe during this time, and we had to cross the ice twice; once the distance was nine miles. My health is not so good as when I left, but I hope a few days will restore me. I am at a loss for words to express the gratitude I feel to those kind and dear friends in Boston, and believe me I shall always consider it my duty to pray for their health and happiness. Please to remember me kindly here – and to the ladies. And in conclusion, permit me to subscribe myself, 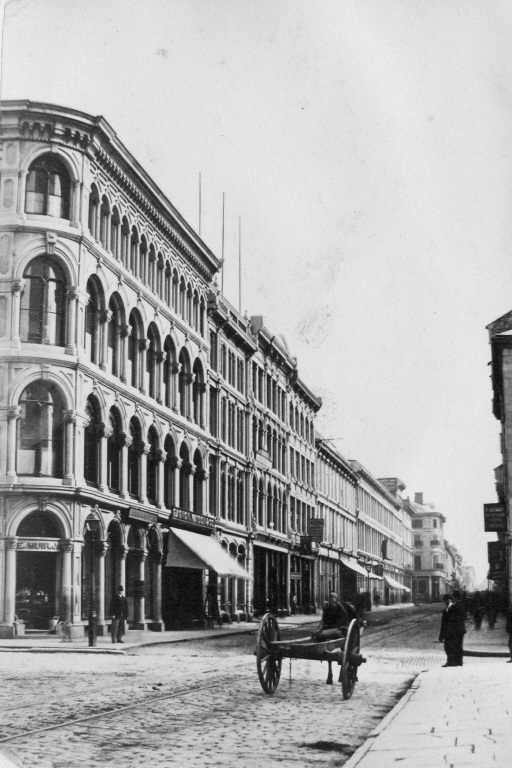 To support himself, Minkins initially worked as a waiter in the Montreal House Hotel near Custom House Square in the section of the city known as Old Montreal. By late March, he opened a barbershop there. By the end of summer, he closed his barbershop and opened the West End Lunch at 172 ½ Notre Dame Street.

One of Minkins’ visitors wrote, “he is in excellent spirits, and feels what he never felt previous to his residence in Canada, that he owns himself, and is perfectly safe from the impious clutch of the manhunter…”

By 1853, he met and married his wife Mary and soon began to start a family. Throughout the rest of the 1850s, he owned and operated several barbershops, inns, and restaurants in Old Montreal. He named one of them Uncle Tom’s Cabin, after Harriet Beecher Stowe’s bestselling novel, in an obvious nod to his stature as a fugitive from American slavery. [11] 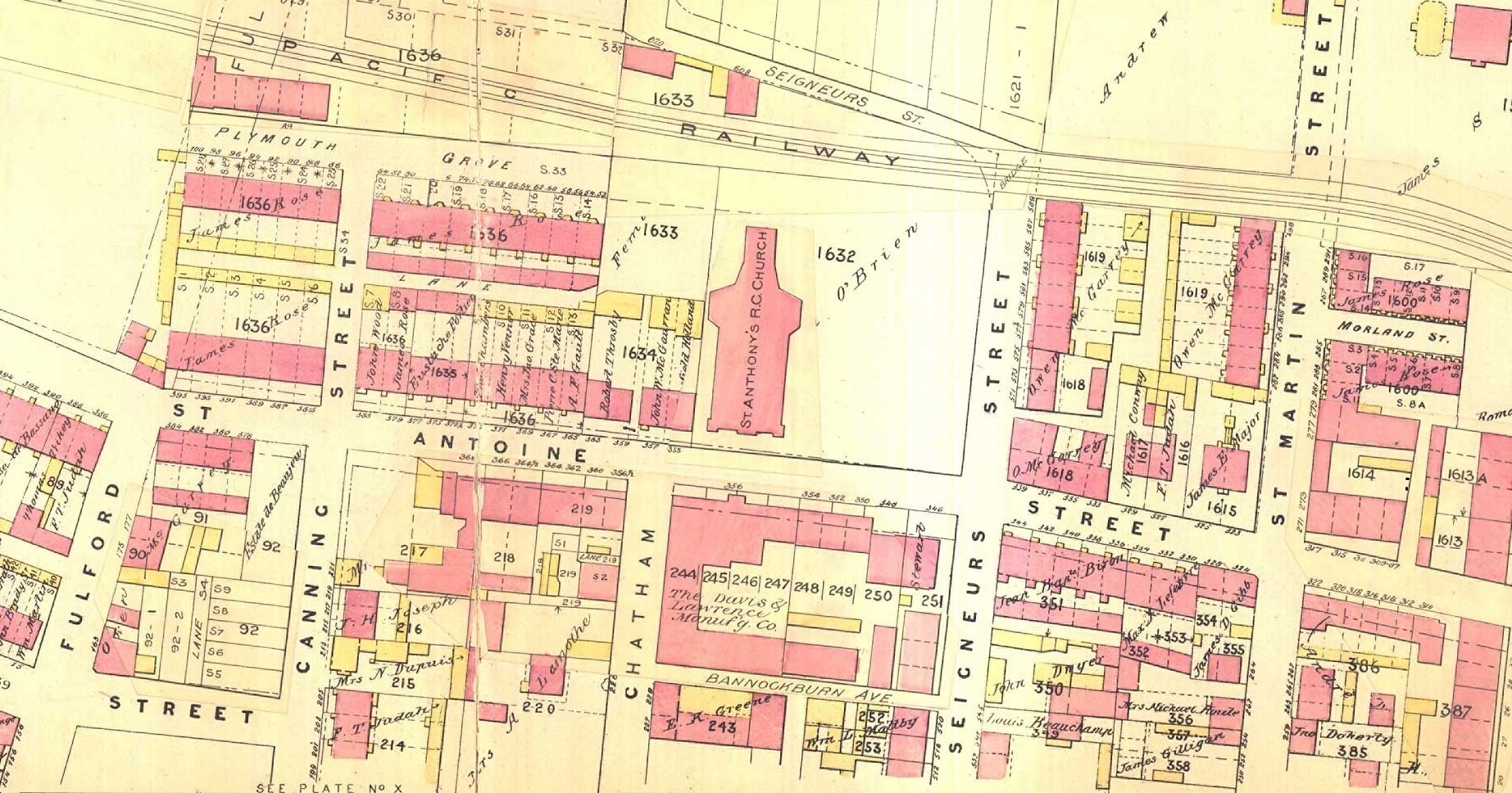 While Minkins and his family lived on Montagne Street, he owned a barbershop on St. Antoine Street. (Credit: Images Montreal)

By 1860, Shadrach Minkins and his family moved from Old Montreal to the St. Antoine Ward, the emerging industrial center of the city. He opened a new barbershop on St. Antoine Street and moved his growing family to a home at 83 Montagne (now Mountain) Street.

He also involved himself in civic life. In 1860, he joined nearly forty other Black petitioners as they called for the creation of a Black Militia. Minkins and the other petitioners declared themselves “loyal and dutiful subjects of Her Gracious Majesty Queen Victoria…desirous of proving their attachment to the British Crown under which they hold their rights and privileges as Free Citizens, in common with their brethren of European origin.” [12] 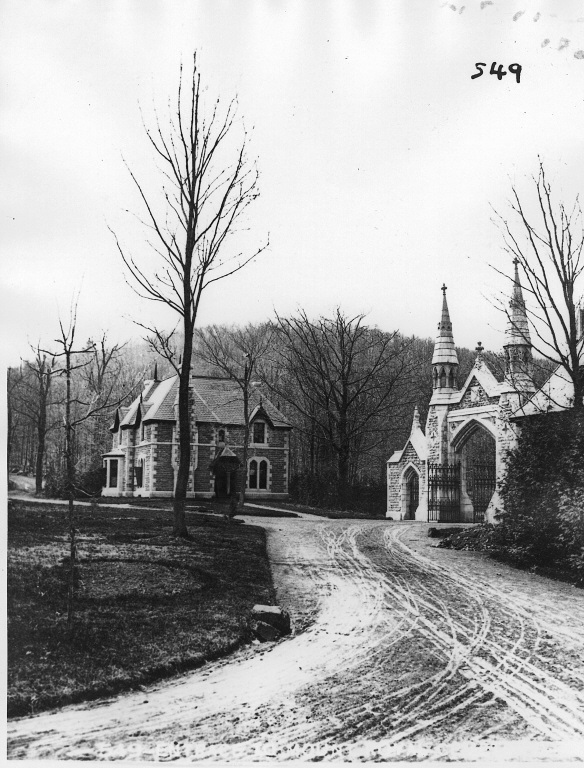 Shadrach Minkins died a “Free Citizen” of Canada on December 13, 1875 of “disease of the stomach.” His remains are buried in an unmarked grave in Mount Royal Cemetery.

Though born enslaved in Virginia, his journey on the underground railroad, though fraught at times, led to a new life of family, opportunity, and freedom in his adopted home of Canada. [13] 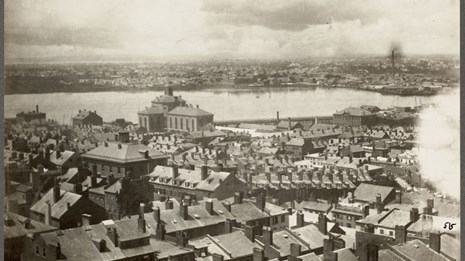