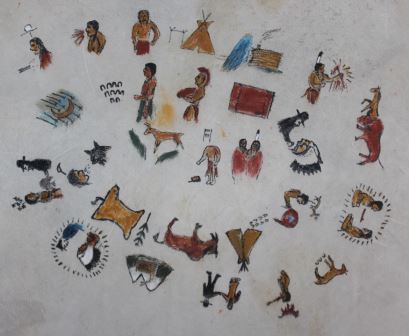 Some Native American tribes, such as Lakota and Kiowa, would come together during the winter. An event that was witnessed or had affected most of the tribe would be chosen to represent that year. One person would paint a picture representing that year onto an animal hide that the tribe kept. Stories might be told about each picture. Each tribe’s winter count would be different. The Native Americans did not have a written language. This was one way of recording their history.

The Winter Count, hanging in Fitzpatrick’s Room at Bent’s Old Fort National Historic Site, is a representation of what a winter count could look like. This one has been painted on an elk hide and represents some events that took place in or near Bent’s Old Fort. The earliest event is represented in the middle of the elk hide and the later events spiral outward.

The Night the Stars Fell, 1833, was a Leonid meteor shower. Leonid meteor showers usually take place in November and generally are small, but when they peak about every 33 years, the sky lights up like "stars falling." The Leonid peak in 1833 was viewed by many Plains Native American tribes. Some of these tribes viewed the meteor shower as a bad omen, and prayed that they would survive the night.

This is a printable list of what the pictures on the winter count represent. (Same as listed in Background information.)

1) Introduce the winter count. Tell students general information about Native American Winter Counts, such as, some were used to record history of the tribes before a written language.

2) Students guess as a class what each picture might represent. Teacher writes on board one popular guess for each picture.

4) Students learn about "The Night The Stars Fell" by completing a worksheet.

Can you find the picture of a meteor shower on the elk hide picture?

What is a meteor shower? (Multiple choice)

Which meteor shower is pictured on the elk hide?

Which month did the meteor shower take place?

If you did not know about meteor showers and you saw what looked like “stars falling,” what would you think it meant?

As a class, come up with a “winter count.” You may use a big piece of paper, or the chalkboard in front of the class. Start with the present year, ask the class what was an important event that happened to almost everyone in this class that year. You could also choose to have a daily count for a week just to demonstrate. Have a student come to the board and draw a simple picture to represent that event. Try to have at least 7 events. Have the pictures go in a spiral. Compare the winter count to modern timelines.

As a different activity, have every individual draw their own winter count representing each year of their lives. Remind students they could include events such as the birth of a sibling or cousin, starting a new school, moving, meeting new friends. This could be a homework assignment and volunteers could present in front of class the next day. The students do not have to be artists if they could tell what is happening in each of their pictures. They cannot write words on their winter counts.

Students can learn about other Winter Counts and compare the different designs. The Smithsonian Institute has an online Winter Count Exhibit.