Lincoln in the White House 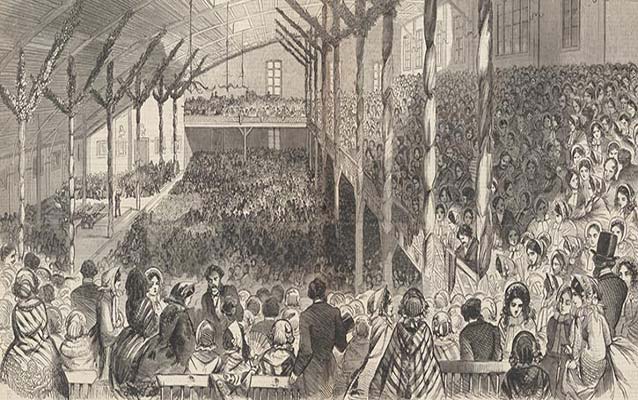 U.S. History: 1, 1A, 2, 2D, 2E, 3A, 6
Geography: I, II, IV, V, VI
English: I, II, III
Thinking Skills:
Remembering: Recalling or recognizing information ideas, and principles. Understanding: Understand the main idea of material heard, viewed, or read. Interpret or summarize the ideas in own words. Applying: Apply an abstract idea in a concrete situation to solve a problem or relate it to a prior experience. Analyzing: Break down a concept or idea into parts and show the relationships among the parts.

What political compromises and actions were taken by Lincoln and his party in order to become President of the United States?

Students will research the political compromises and actions taken by Lincoln and his party in order to secure his party nomination and later obtain the necessary electoral votes needed to become President of the United States.

The Lincoln - Douglas Debates of 1858 catapulted Abraham Lincoln to national prominence for his stance on slavery in the United States. His belief in restricting the expansion of slavery into the western territories appealed to many people in the North.
Although Lincoln lost the election for the Senate seat from Illinois to Stephen A. Douglas i 1858, the national newspaper coverage of the debates made him a household name.  His party and national status was elevated further on February 27, 1860, when he delivered his Cooper Union speech in New York City before prominent Republican Party members.

During the Illinois Republican State Convention held at Decatur in early May 1860, Abraham Lincoln received his first endorsement as a candidate for the presidency of the
United States.  Referring back to Lincoln's earlier years on the frontier, his supporters
promoted him as "The Rail Candidate."  Heading into the Republican National Convention in Chicago, Illinois on May 16, 1860, Lincoln posted a second place
showing on the first balloting.  Through the use of compromises and promises, Lincoln
gained more support and finally became a compromise candidate on the third round of
balloting at the Convention, ahead of his key rivals William H. Seward of New York and
Salmon P. Chase of Illinois.  Ironically, both men would later serve in Lincoln's cabinet.

Republican Presidential candidate Abraham Lincoln would square off against his old
Illinois rival, Stephen A. Douglas, in the election of 1860 as Douglas was nominated for
President by the Northern Democrats.  A split in the Democrat Party led the Southern Democrats to nominate a pro - slavery candidate, the sitting Vice - President, John C.
Breckinridge of Kentucky.  Those of the old Whig and Know Nothing Parties that felt disenfranchised by all of the other candidates put their support behind a fourth candidate of the new Union, or Constitutional Party, John Bell of Tennessee.

The election of Abraham Lincoln on November 6, 1860, became the catalyst that
ignited the Civil War.  Six weeks after Lincoln's election as President of the United
States, South Carolina seceded from the Union on December 20, 1860, followed by
six more states of the Deep South before Lincoln was inaugurated as President on
March 4, 1861.

For this lesson students will need one of four accounts from the book Meeting Mr. Lincoln, journal entry example sheet, and journal entry worksheet.

During the Illinois Republican Convention held in Decatur in early May 1860, Abraham Lincoln received his first endorsement as candidate for the presidency of the United States. His supporters promoted him as "The Rail Candidate." Through the use of compromises and promises at the National Republican Convention held in Chicago, Lincoln became a compromise candidate on the third ballot held on May 18, beating out rivals William H. Seward of New York and Salmon P. Chase of Ohio.