From Core to Crust 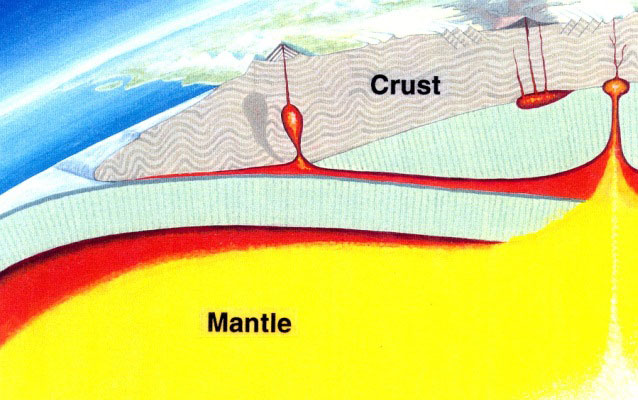 Grade Level:
Upper Elementary: Third Grade through Fifth Grade
Subject:
Math,Science,Social Studies
Lesson Duration:
90 Minutes
State Standards:
NATIONAL/STATE STANDARDS:
CCRA.SL.1
NGSS.SEP.2
Thinking Skills:
Remembering: Recalling or recognizing information ideas, and principles. Understanding: Understand the main idea of material heard, viewed, or read. Interpret or summarize the ideas in own words. Applying: Apply an abstract idea in a concrete situation to solve a problem or relate it to a prior experience. Analyzing: Break down a concept or idea into parts and show the relationships among the parts. Creating: Bring together parts (elements, compounds) of knowledge to form a whole and build relationships for NEW situations.

What are the Earth's layers and how do they change over time?


The Earth, like the life on its surface, is changing all the time. Parts of it are molten and slowly rise, cool, and sink back toward the Earth's core, like soup simmering over a fire. Continents drift around the globe creating the features we think of when we think of geology. But most of the Earth lies unseen between our feet and the other side of the world.

The Earth is made up of the crust, the mantle, and the core. Although geologists have only drilled a few miles into the Earth's crust, they have indirectly deduced much about the remainder of the planet's composition. The Crust
What we walk on and see is the crust. It is wafer thin, only 3 to 22 miles thick. If the Earth were the size of a billiard ball, the crust would be as thick as a postage stamp stuck to its surface (think how thick the membrane of life would be that coats the Earth!). The crust is broken up into enormous sections the size of continents, called tectonic plates. Earthquakes and volcanoes are common along the margins of these moving plates. The volcanic activity at Craters, however, is not related to it lying on the edge of a continental plate. Rather, geologists theorize that southern Idaho has passed over a hotspot or mantle plume.

The Mantle
The mantle is about 1,800 miles thick and is under pressure and therefore denser and hotter than the crust. The mantle can be subdivided into three regions.
The Lithosphere. The lithosphere includes the crust and the outermost part of the mantle. It is relatively cool and rigid and float upon the hotter layer below.
The Aesthenosphere. This zone in the upper mantle is hot enough to flow at a very slow rate of speed and acts as the sea upon which the lithosphere floats.

The Deep Mantle. Beneath the asthenosphere the rock becomes progressively more plastic. Many geologists believe that huge convection currents mix this part of the mantle as it rises toward the asthenosphere, cools, and sinks back toward the core again.

The Core
Because of gravity, the densest materials are found near the Earth's center, mostly iron and nickel. The 2,100 mile thick core is under the pressure of 1,800 miles of mantle and is therefore very hot. Geologists believe this is the main source of heat for the geologic events we know about in the mantle. Based on how energy waves pass through the Earth, geologists know that the core is in two layers.
The Outer Core. The outer core is molten and responsible for Earth's magnetic field.
The Inner Core. The inner core is extraordinarily dense, solid metal.

See "Additional Resources" below for links to introductory materials about the geology of Craters of the Moon.

From the Teacher's Guide to Craters of the Moon.

Part 1 - Human Model of the Earth
Prepare slips of paper for your students with the following words (make adjustments for your class size):


Go outside and randomly issue the above paper slips to the kids. A fun way to have them assemble in groups is to have them loudly chant the words in quotation marks without showing each other their slips of paper. As they yell out their chant they listen for the same chant coming from others and then congregate with them.

Once they are in groups, tell them that they are going to build a human model of planet Earth. The Earth is a dynamic thing, so they must make it come alive in their skit.

Explain briefly what characterizes each part of the Earth and then ask each group to come up with an appropriate movement while they chant "molten metal!," "rolling stones!," or whatever. Give them a few minutes to work this out.

Start with the core and add layers until you've completed the Earth with the lithosphere. Encourage them to come up with their very own ideas but if they need some direction, here are some suggestions for theatrics:

Inner core- Hand the inner core person or people a trillion pound weight and have them grunt "heavy metal, heavy metal" while under this massive weight. Or have them flex their muscles or lift weights while chanting to demonstrate the pressure they are under.

Outer core- These kids could weave in and out as they circle the inner core and chant "molten metal" to show that they are fluid. They could grit their teeth while they chant as they too are under lots of pressure.

Deep mantle- As they chant "red hot rocks" they could spin and revolve around the core in slow motion to show that they are plastic.

Asthenosphere- This layer is very viscous and the kids could demonstrate it by keeping their feet planted while they sway, chant "rolling stones!," and face outward with their hands to show that they are holding up the lithosphere.

Crust/Lithosphere- Kids could link arms in groups of two or three and revolve around the Earth while chanting "moving plates!" to simulate the moving plates lithosphere and crust. One or two of the crust/lithosphere kids could simulate a volcano or earthquake.

Part 2 - Build a Cross Section of the Earth
Students will build a cross section model of Earth using materials that demonstrate the unique characteristics of its layers.

Divide the students into groups of about three to six kids. Have them work together as they construct a section of the Earth from the inner core to the lithosphere and crust.

The Container. Use a tall, narrow box like a milk carton to make the model. Cut out part of a panel as shown to serve as the window to the Earth's composition. Cover the box with paper so that it can be labeled and decorated.

Inner Core. Cut several pieces of corrugated cardboard so that they will fit in the bottom of the box. Stack and glue the pieces and wrap them in paper.

Outer Core. Fill a small ziplock bag or other waterproof bag with water. So that it won't rupture from the layers that will be added above it, make supports out of card- board for the sides as shown. You can use crumpled plastic bags instead of water-filled bags if you feel water leakage will be a problem.

Deep Mantle. Use clay or dough (see recipe below) to make this layer. The dough can be painted with water colors or poster paints. If you want it to remain soft, the kids could enclose this layer in a zip-lock bag and squeeze out the air before sealing it.

Aesthenosphere. Use a different colored clay or dough to make this layer. Again, it could be sealed in plastic so it will remain soft.

Finishing touches. The kids could tape a nail and nickel on the box near the core to show that it is made of iron and nickel. With the information already provided, students could write a few words on the outside of the box about the characteristics and dimensions of the layers.

Finishing touches. The kids could tape a nail and nickel on the box near the core to show that it is made of iron and nickel. With the information already provided, students could write a few words on the outside of the box about the characteristics and dimensions of the layers. Mix all ingredients in a saucepan and cook about 10 minutes over medium heat until the consistency of mashed potatoes. Remove from heat, empty onto a plate, and cover with a damp cloth. When cool, knead into a ball. Place in a sealed plastic bag and refrigerate until use.

Note: Earth's layers are not as distinct as illustrated here and by your models. There are transition zones and variations in densities within layers. The presence of Craters of the Moon not on the margins of continental plates demonstrates that the layers beneath our feet are far from uniform.

Earth's layers are not as distinct as illustrated here and by your models. There are transition zones and variations in densities within layers. The presence of Craters of the Moon not on the margins of continental plates demonstrates that the layers beneath our feet are far from uniform.

Geology of Craters of the Moon:
For Teachers
For Students
Glossary
Analogs