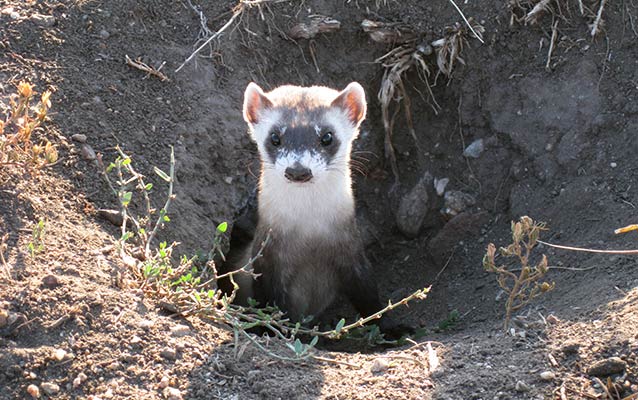 Grade Level:
Upper Elementary: Third Grade through Fifth Grade
Subject:
Science
Lesson Duration:
60 Minutes
Common Core Standards:
3.RI.3, 3.RI.4, 4.RI.3, 4.RI.4, 5.RI.3, 5.RI.4
State Standards:
South Dakota Science:
3rd Grade LS4-2 - Explain variations in characteristics among individuals of the same species may provide advantages in surviving.
5th Grade LS2-1 -Describe the movement of energy and matter between producers and consumers.
Thinking Skills:
Understanding: Understand the main idea of material heard, viewed, or read. Interpret or summarize the ideas in own words. Applying: Apply an abstract idea in a concrete situation to solve a problem or relate it to a prior experience. Analyzing: Break down a concept or idea into parts and show the relationships among the parts. Creating: Bring together parts (elements, compounds) of knowledge to form a whole and build relationships for NEW situations.

The black-footed ferret is one of the most endangered species in North America.  This is due to changes in both the habitat – prairie dog towns – and their food source – prairie dogs. Students will experience a simulation that investigates the impact of these changes and leads students to answer the question:

*What is the difference between a generalist and a specialist species?
*How do changes in habitat and food sources impact species, specifically the black-footed ferret?

The black-footed ferret (Mustela nigripes) is one of the most endangered species in North America. An endangered species is a species of organisms facing a high rick of extinction. Generally this is caused by changes in the animal's habitat; this could be changes in living conditions or food sources. In the case of the black-footed ferret both the habitat – prairie dog towns – and their food source – prairie dogs – were changed.

Ferrets are long, slender, and flexible, which make them a perfect prairie dog predator. This body shape is ideal for moving through narrow tunnels. They have razor sharp teeth which they use to kill their prey. Ferrets are predators but they are also prey. Black-footed ferrets are hunted by owls, hawks, eagles, coyotes, badgers, and bobcats; all of which are found at Wind Cave National Park.

In 1967 the black-footed ferret was listed as an endangered species. In 1974 the last known ferret population located in southwestern South Dakota vanished. In 1977 a park naturalist observed a ferret at Wind Cave National Park. This was the third sighting in the park after the ferret was listed as endangered and it was the last documented park sighting. At this time scientist believed the black-footed ferret was on the verge of extinction and existed in such small populations that the animals would go extinct because of diseases or a natural disaster.

In 1981 a ranch dog named Shep killed a black-footed ferret near Meeteetse, Wyoming. This led to the discovery of approximately 130 ferrets in that area. These ferrets were studied but an outbreak of sylvatic plague and canine distemper decimated the population.

Scientists captured the last 18 known ferrets from Meeteetse by the end of 1987. These animals were transported to a facility in Sybille Canyon, Wyoming where a captive breeding program began. This facility later became known as the National Black-Footed Ferret Conservation Center. In 1991 the first black-footed ferret reintroduction site selected was Shirley Basin in central Wyoming. Forty-two juvenile ferrets were released. Since then ferrets have been released in many of the plains states. In some areas, like the Conta Basin near the Badlands National Park, ferrets have survived and have developed a self-sustaining population.

To date ferrets have been reintroduced in Wyoming, South Dakota, Arizona, Montana, Utah, Colorado, Kansas, and Chihuahua, Mexico. Currently the most successful population is in Conata Basin near Badlands National Park, South Dakota. The black-footed ferret recovery goal is to have at least 10 separate, self-sustaining, black-footed ferret populations. Wind Cave National Park is becoming one of those areas.

To achieve this goal many federal, state, and local agencies are working together along with private citizens. Public involvement is key to the recovery of the black-footed ferret. If you see a black-footed ferret in Wind Cave National Park please report the sighting to a park ranger. This information can help wildlife managers learn more and better protect this amazing animal.

One of the reasons the black-footed ferret is endangered is because it is very picky about where it lives and what it eats. The following activity will help student understand why ferrets and other animals become endangered and what we might be able to do to help them.

*2 by 2 inch square pieces of paper of different colors to represent different foods that prairie animals eat. About 25 of each color will be enough for a group of 20 children. There should be about twice as many (50) red pieces to represent the prairie dog color. Depending on the colors of construction paper on hand, different colors can be used. Animal groups can be combined as well: Mice and Rats=Rodents; Lizards and Snakes=Reptiles, etc.

*Print three copies of "Picky Eater Name Tags" for a group of 20. Teh name tags have various prairie animals printed on them with the food that they eat (and their representational colors) indicated. Below are the list of animals and what they eat.

Make three copies of each animal name tag for a class of 20.

*Explain to students: Sarah is a picky-eater who only eats grilled cheese, but her brother Josh eats all types of food. Sarah and Josh's parents ran out of cheese in their house and don't have time to go to the grocery store. Who is this going to be harder for - Sarah or Josh? Why?

*Explain to students that there are picky eaters in the animal world also. Unlike Josh and Sarah's parents, animals can't just go to the grocery store to get more when they run out of their favorite foods. Today, we will be learning the impact of changes in habitat and food on animals that are both picky eaters and who eat everything.

1. Have the children stand in a circle and give each child a nametag.

2. Have them look at their animals and note what they eat.

3. Scatter the pieces of paper inside the circle.

5. Begin the activity by saying "Go!" When most of the papers have been picked up, call all the kids back into the circle and have them count their pieces of paper.

6. Ask the children to report how many pieces of paper they have gathered. Record the findings on the "Picky Eater" log.

7. Repeat the simulation two more times, but each time take away more of the red papers. Explain as you take away the paper that this is the impact of loss of habitat on the prairie dogs.

8. Ask students to record the results on their "Picky Eater" log each time. each time removing more and more the “prairie dog” color paper. This represents the loss of prairie dogs. Coyotes will continue to collect plenty of paper, but the black-footed ferrets will have fewer and fewer pieces of paper to collect.

9. Ask students to answer the "Think About the Simulation questions. When going over the answers, make sure to discuss the near extinction of the black footed ferret in the context of the loss of prairie dogs and prairie dog towns during the late 1800’s and into the 1900’s. Also, feel free to mention the specific  example of the ivory billed woodpecker. This bird is nearly extinct because of the large-scale destruction of its original habitat: large tracts of hardwood forests with close access to water.

10. Ask students to share their answers to questions 7 and 8. Create a class version of the spectrum asking students to justify their position demonstrating understanding of generalist and specialist species.

*Ask only some students to participate in the simulation while others record the data for students who struggle with transitions.

*Ask students to research an animal on the critically endangered species list available here and investigate whether that species is a generalist or specialist in either habitat or food source.